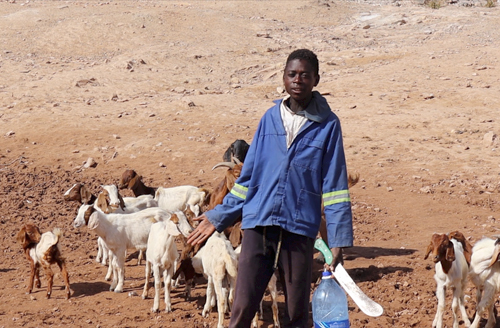 OPUWO – Communal farmers as far as Ondije, Otjinungua, Okatumba Kovipoza, Otjikongo and Otuherera have flocked to the outskirts of Opuwo town to graze their livestock because of the dry spell experienced in their areas.

The farmers are also complaining about losing a considerable number of livestock while trekking to Opuwo for better grazing. According to the farmers, they lose up to ten goats in a single day.

The communal farmers came to know of the little rainfall Opuwo has received when they travel to town for their needs and services.

However, relocating to Opuwo for better grazing has seen its fair share of challenges, including the high cost of transportation and expenses such as paying N$500 to traditional leaders to be granted permission to settle in their areas. “People are moving from those villages to Opuwo with the hope but there is no hope there is no rain. This is telling us that Kunene is hit by severe drought.

Urgent actions need to be taken from the central government before something negative happen to these people,” said Ueutjerevi Ngunaihe, the Opuwo Urban councillor.

Although the vegetation looks green, there is no grass for the animals to graze or water for both animals and people. They have to walk a distance further in the mountains to seek water for use and animals to drink because the nearest lake has dried up.

The drought situation has also impacted drought-hit inhabitants who rely on goat milk and meat for survival. “Goats at least have something to eat, but they are dying of diarrhoea. People are suffering because they have to collect water from far and carrying on their heads.  We just rely on the small change from the social grants for kids after paying their school needs,” said Karinjengia Koruhama who hails from Otuherera. Ngunaihe said his office has approached the agriculture and water ministry to at least help supply water for human consumption to the affected inhabitants.