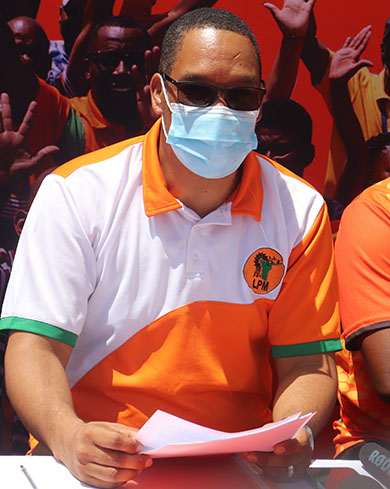 Landless People’s Movement leader Bernadus Swartbooi said when the party promised voters to withdraw councillors who are not performing or living up to their mandate, it meant exactly that, in the literal sense of the word.

He made these remarks during a press conference held in Windhoek on Thursday. “We cannot wait for five years to correct a problem, we do so immediately and swiftly without throwing away those councillors,” he explained.

The LPM last week recalled Sydney Skakana from the local authority of Keetmanshoop over an allegation that he defied party directives not to support a decision to disconnect the water supply of residents, New Era has learned.

Skakana becomes the second councillor to be recalled by the party in less than a month after the then mayor of Keetmanshoop, Maree Smit was also withdrawn from the council.

Swartbooi said the question to be asked by voters should not be if LPM is a stable party, but rather if the relationship between voters and the party is stable.

“Some councillors in the Keetmanshoop local authority have been unable to overcome key challenges that need to be addressed correctly,” said Swartbooi. He said those challenges include the income stream, administration and development of the southern town. The party leader further explained that the recall was an internal party issue.“As we invest a lot of energy and resources in training and equipping local authority and regional council councillors, the party expect them in return to respect internal party programmes and meetings that informed them that if they are not working they will be recalled,” he emphasised.

Swartbooi mentioned that another expectation from elected councillors is that of working diligently in areas where they are assigned. “Any recall will be done with an assessment made by the local, regional and national leadership,” he added.

He also said LPM will continue to invest in recalled councillors through training and capacity building, whereby they will get other assignments on the way forward.

“If you (councillors) don’t work, you will be reprimanded, spoken to, advised and guided but there comes a time that we need to strengthen you by taking you out and invest in you in a different sphere,” he said.

He also noted that people alleged the politician was recalled last December because of the water issue prevailing in Keetmanshoop by that time. “It was, however, about the totality of where Keetmanshoop should have been after a year,” he explained.

He said the decision to withdraw councillors is not an easy one as the party is dealing with human beings and equally dealing with voters who must continue to have confidence in the party.

“These Keetmanshoop councillors are not the first ones to be withdrawn and will also maybe not be the last ones, but LPM cannot commit itself to keep councillors that are not working as expected,” said Swartbooi.

He also observed that the public only see when councillors are withdrawn but are not aware of the significant number of meetings and engagements taking place behind the scenes to equip councillors for their roles.

“Voters are only seeing and criticising the end part without recognising the entire process,” the member of parliament said.