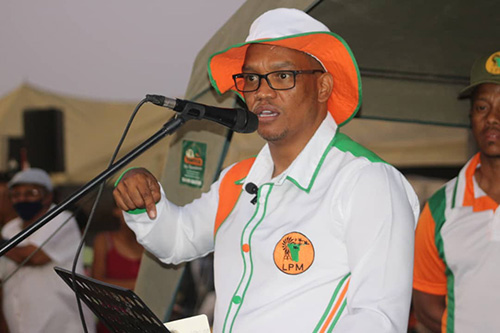 WALVIS BAY - United Democratic Front central committee member Daniel Tsaneb has accused the Landless People’s Movement leadership of cheap tactics, saying that it is disrespecting the ancestors of the ǂNukhoen (Damara) tribe by having genocide feedback sessions in the Erongo region, predominantly regarded as ǂNukhoen jurisdiction.

The LPM leadership will have genocide discussions and report to its members from 6 November until 10 November on the status of reparation talks.

However, Tsaneb is accusing the leadership of having other motives regarding the discussions.

“Swartbooi cannot disrespect us as if we can’t differentiate between motive and truth. We knew from the onset that he never advocates as a national political leader but advances the Nama and Herero politically motivated tribal agenda. We also know what prompted this sudden cheap politically-motivated move to address the ‘vulnerable’ Damara community,” Tsaneb said in a statement released on Thursday.

He said Swartbooi was awoken by the fearless UDF president Apius Auchab who stood up boldly and told the world that not only the Nama and Herero communities suffered under the evil regime of Germans.

“This also includes the aboriginal tribes of this country which is San and Damaras. In fact, the Herero and Nama committees (who supported the German regime) owe the Damara tribe an apology for their ancestors’ betrayal. This is recorded in our history that our ancestors were murdered by these two tribes,” Tsaneb said.

He urged the Damara tribe not to be fooled by LPM’s roadshow while he urged Swartbooi not to provoke the peace of the Damara people.

“We are not gullible. It is an insult to the Damara communities what the Herero and Nama communities were doing for years. It’s about time that they must be called to order for these disrespectful narratives,” he said.

According to Tsaneb, the Damara youth is not afraid to mobilise themselves against such propaganda and politically motivated agendas by unapologetic Herero and Nama tribes.

In response, LPM spokesperson Eneas Emvula said, “we would like to make it very clear to the delusional Daniel Tsaneb that LPM has constituencies at each and every location that we visited and plans to visit, if not that there is a democratically elected office bearer and unlike other political parties, it is obligated to return to such constituencies irrespective of how frequent we deem it important. Listed on our itinerary are formerly known Damaraland locations including Khorixas, Outjo, Otjiwarongo. These are areas where LPM members and supporters exist and continue to grow daily and those are the audience we visit and meet.”

Emvula said Tsaneb’s opinion is highly toxic and tribalistic by nature and the Namibian Constitution guards against this.

“LPM has no appetite in the tribalistic polarisation of the genocide issue. Needless to say, it is about educating the nation and primarily affected communities, something the central government failed to do,” said Emvula.

“We hope that Tsaneb has been a keen follower of the debate and the difference of opinion between Auchab (UDF) and Dudu Murorua in parliament. Tsaneb’s view is self-preserving and failed political unitarism and his threats confirm that he is irrelevant to the subject.”

Emvula said the genocide issue is not a one-sided debate and every affected and non-affected member of the Namibian society is entitled to make their contributions toward a collective redressing of past injustices committed by colonial governments.