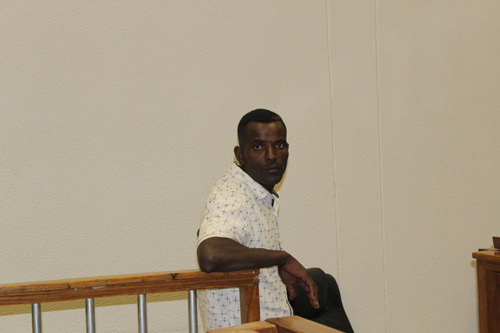 A resident of Windhoek’s Goreangab, who was accused of stabbing his former girlfriend seven times with a knife during 2016, was convicted of murder with direct intent yesterday by High Court Judge Naomi Shivute.
The judge found Richard Bethuel Goaseb (37) had the necessary intention to kill when he stabbed Magdalena Swartbooi with whom he was in a domestic relationship and has children with.

Goaseb entered a plea of not guilty on a charge of housebreaking with the intent to murder and murder read with the provisions of the Domestic Violence Act at the start of his trial.

According to prosecution, during the evening of 13 April 2016 in the Goreangab location, Goaseb arrived at the house of the victim armed with a knife whereupon he kicked open the front door and rushed into the bedroom where the deceased was laying on the bed.
He then proceeded to stab her at least seven times all over her body whereafter he carried the lifeless body of the deceased to the living room before fleeing the scene.

The victim died on the scene due to injuries sustained during the stabbing. Judge Shivute, however, found that Goaseb did not break into the premises as he and the deceased were co-owners of the residence and there was no evidence that he moved out.
From the evidence adduced, the judge said, although the accused promised to move out of the shared residence, he did not move out because all his belongings except his TV set was still there. “It further follows that since the accused is a co-owner of the premises, it could not be said that he broke into the premises under the circumstances.

There was also no court order that had prevented the accused from entering the said premises,” the judge reasoned. With regard to the murder charge, Shivute said, the accused did not disclose his defence, however, as the trial progressed, it became apparent that he raised a defence of non-pathological criminal incapacity because of uncontrollable anger.

In determining the accused’s criminal incapacity, the court must have due regard for not only to the expert evidence but also to the facts of the case, including the reliability of the accused as a witness, she stated.
“In the present matter, although it was put to witnesses that the accused was consumed by anger to the extent that he lost his sanity temporarily, there has never been a proper foundation laid for this proposition,” the judge said.

According to the judge, she is satisfied that the State proved its case beyond reasonable doubt that Goaseb unlawfully and intentionally killed the deceased without lawful justification.