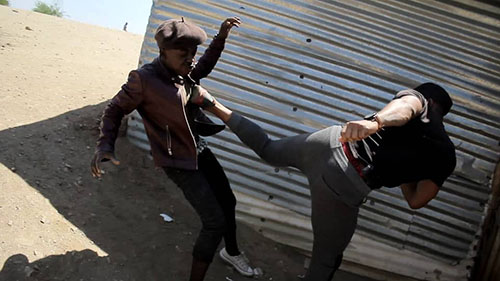 Martial artist Willem Gaoaseb took it upon himself to produce a short action film titled ‘Hostage’ to show off his martial arts skills and stunts.

Gaoaseb (21) successfully shot the film in the Okuryangava settlement with members of the community.  The film is about a gang member who kidnapped a young girl from the community and Seun, the main character, who took it upon himself to search for the girl.

The action begins with a tussle between Seun and the gang members in the shebeen where Bute is held, hostage.

“The idea came from a movie called ‘John Wick and Extraction’. The plan was to incorporate our skills and stunts in producing action films that are rare in Namibia,” commented Gaoaseb.

Songwriter Micheal Pulse told VIBEZ! that he was impressed after watching the film for the first time.

“I like the special effects. The stunts for me are really some of the best coming out of Namibia,” said Pulse.

Gaoaseb believes he can bring change to Namibia’s film industry at large, and, at the same time provide the youth with a platform to express themselves through action movies.

The cast includes the residents of the Okuryangava community. The idea behind recruiting the young man from the community is to bring about change in the Informal settlement of Windhoek.

“Many of the youth in Okuryangava are unemployed, uneducated or simply dropouts. I want to create a second chance for them,” added Gaoaseb. The main aim of the short film is to show the skills that the Namibian film industry can and should operate in.

“We hope to achieve a world class end result that looks cinematic and professional, which will help us stand out and receive the recognition that Namibian films deserve,” Gaoaseb said confidently.

The actor said equipment, to produce world class film, and skilful people who are passionate about films that look good and tell a great story still lack in the local film scene.