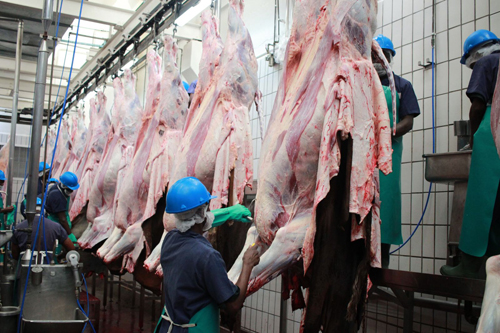 Meatco’s CEO, Mwilima Mushokabanji, says the corporation is working hard to reduce its debt and is creating a new Meatco that adapts and responds to the prevailing business environment. He was reacting to a report of an independent analyst, Rainer Ritter, of last year, which formed part of an investigation by the ministry of state-owned enterprises into the operations of the company.

“I am sure you saw a document circulating that says that Meatco owes debt of approximately N$800 million. I would want to clearly state that is not correct and provide the correct information, and when we revised our strategy as Meatco we were very clear in saying that we want to generate wealth for the country through being sustainable, competitive and profitable. One of the strategies we have addressed aggressively was the debt reduction strategy. At this stage, our long-term debt stands at N$382 million and we have worked hard at reducing this debt which is mostly interest paid to banks as our overdraft interest rates were very high,” said Mushokabanji.

The report allegedly stated that the company could face liquidation if it does not reduce costs drastically to make it profitable.

However, the CEO is confident that current debts would be reduced by 50%, assuring stakeholders that the corporation will continue to play its role in stabilising the entire livestock industry.

According to Mushokabanji, the total agricultural contribution to the Gross Domestic Product (GDP) in 2019 was N$6.8 billion in agriculture and forestry and Meatco contributed 26% of that, which is equivalent to N$1.7 billion of which the total industry contribution is N$11 billion. With this said, Meatco plays a critical role in the Namibian economy.

The CEO also revealed that in 2017, the total contribution of the livestock industry to GDP was N$3.5 billion of which 50% came from Meatco.

Mushokabanji is confident that as a leader and with a strong and enlightened professional board as well as his dynamic management team of experts in the livestock sector, there is no doubt that they are reconfiguring and transforming the Meatco business t into an organisation that operates in a volatile, uncertain, complex and ambiguous (VUCA) world.