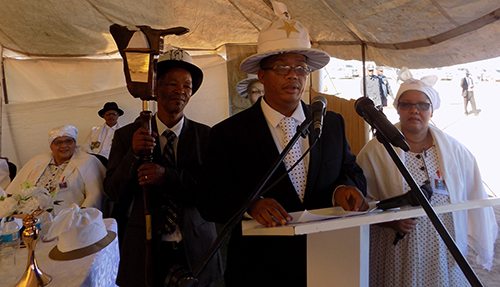 Windhoek High Court Judge Thomas Masuku last week criticised former minister of urban and rural development Peya Mushelenga for his failure to take decisive action in the designation of a chief of the Witbooi clan.

“The minister in this case abdicated his decision-making powers by adopting the attorney general’s (AG) opinion lock, stock and barrel. This, the court found, was impermissible abdication of responsibility and was thus liable to be set aside on that score,” the judge said when he slammed a decision by Mushelenga to designate Hendrik Ismael Witbooi as the kaptein of the Witbooi clan. Salomon Josephat Witbooi had applied to be recognised as the kaptein after the death of previous acting kaptein Christiaan Rooi in October 2015. Ismael then entered the fray, and also applied to be designated as kaptein. Faced with the two applications, Sophia Shaningwa, the then minister, appointed an investigating committee which recommended certain steps to be adopted, including an election as a last measure.

Mushelenga then took over from Shaningwa as minister in 2019 and when confronted with the two rival applications for the chieftainship, elected to ask the opinion of the AG, who took the position that the customary law of the Witbooi clan did not allow for a member of the family to be appointed as kaptein if that member hails from the maternal side of the royal family.

On the basis of that opinion, Mushelenga then disqualified the application of Salomon, and designated his rival Ismael as kaptein. Dissatisfied with the decision, Salomon and four others approached the court to set that decision aside. Judge Masuku ruled in favour of Salomon, and set the decision to designate Ismael as kaptein aside. He also set aside the President’s recognition of Ismael as traditional leader in a proclamation published in August 2019.

The judge stated that since the previous minister had taken a decision, which included that an election was to be held, it was not open to the succeeding minister to take a fresh decision. “Such new decision was thus unlawful as he had become functus officio in that particular regard,” he stressed.

He further said there is a difference between a traditional authority and a traditional council. An application for approval of designation by the minister must be made by the traditional council or chiefs’ council, in terms of section 5(1) of the Traditional Authorities Act, the judge said, adding that the traditional authority has no role in this regard. However, the judge remarked that while he finds it unnecessary to determine whether the customary law of the Witbooi clan does not allow offspring from the matrilineal side of the royal family to become successors and for females to ascend to the chieftainship of the clan, it is obvious that the disqualification of the applicant from assuming chieftainship was in violation of article 10(1) and (2) of the constitution.

“It is abundantly clear, without deciding the issue directly, that from what I have stated above that the customary law of the Witbooi clan, on the respondent’s version, including the attorney general’s opinion, insofar as it does not recognise boys from the matrilineal line of the royal family, is in conflict with the constitution. For that reason, it cannot be regarded, in the light of that inconsistency with the constitution, to be of force and effect in that particular regard,” the judge said of the respondent’s contention that Salomon is not liable for the chieftainship because of his ancestry.

He observed that this led him to the conclusion that the minister accepting the customary law version of the respondents, without necessarily deciding on the correctness of the customary law, is in violation of the constitution in that it discriminates against women. For that reason alone, the judge stated, the decision of the minister in approving Ismael’s designation cannot stand, and must perforce be set aside. He awarded costs to the applicants on the scale of one instructing and two instructed counsel.