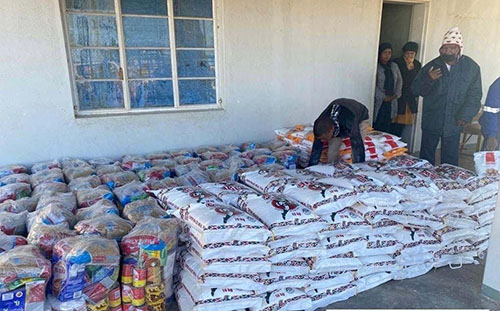 Momentum Metropolitan Empowerment Trust recently donated food parcels worth N$80 000 to pensioners of the Kosis settlement in the //Kharas region.

The donation of much-needed food and other essential items was handed over to the community on 24 May 2022.

As a way of primarily helping the most vulnerable members of the community, the Momentum Metropolitan Empowerment Trust donates food parcels twice a year to the pensioners of Kosis settlement. The donation includes staple foods such as maize meal, pasta, rice, sugar, cooking oil etc.

According to Ingah Ekandjo, a trustee, this is an ongoing initiative usually done around June or July and December every year.

“We began this project back in December 2013 and never looked back ever since. We want to ensure that our elders always have something to eat,” she said. The initiative is managed by a local pastor well known as Pastoor Kooitjie, who oversees the distribution of the parcels to the households.

“We are always grateful and thankful to the Momentum Metropolitan Empowerment Trust for this kind gesture,” he said.

Kosis settlement is situated in south of the country, approximately 100Km West of Keetmanshoop near Bethanie. It is one of several communities with a large group of pensioners in the
//Kharas region.