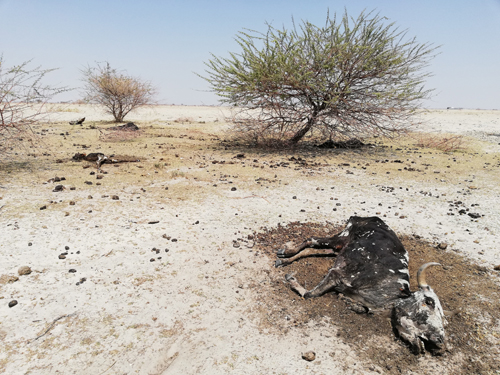 Last week Cabinet made recommendations to relevant authorities to urgently help revive the Kunene region from the devastating drought. This is because despite good rains received in most parts of the country this year, Kunene received minimal rainfall, which made no significant impact on the livelihood of communities and livestock in the region.

As a result Cabinet directed responsible offices, ministries, and agencies to deal with the proposed recommended actions and to submit their reports to the Office of the Prime Minister (OPM) by no later than end of August 2021.

Deputy communications minister Emma Theofelus briefed the nation saying that OPM should urgently avail more trucks and helicopters in some cases to ease the challenges of distribution of drought relief in the region.

“OPM should facilitate the installation and rehabilitation of all broken and non-functional boreholes as a matter of urgency and the ministry of education, arts, and culture should provide affected leaners from community hostels who rely on school feeding programmes with additional rationing of food,” the deputy minister added.

Furthermore, in the short to medium-term, which is three months to one year, the deputy minister said OPM was directed to facilitate the drilling of additional boreholes at strategic points, and the environment ministry should consider minimising wild animals, particularly in the Opuwo rural, Sesfontein, and Khorixas areas, to reduce human-wildlife conflicts.

Theofelus stated that in long-term recommendations, the ministry of agriculture, water and land reform, and the regional council should further prioritise and fast-track the envisaged hydroponic fodder production project.

Additionally, the water ministry has been advised to expedite the planned water pipeline from Ruacana in the Omusati region to Opuwo.

“Government to consider pumping water from
the Kunene river open canal or the pipeline to
supply the communities with water, and also the government is to revisit the construction of the desalination plant from the sea to supply water
to the inland of the Kunene region,” Theofelus detailed.

The regional council was further directed to assist farmers to formalise livestock marketing, saying government will continue assisting affected farmers with restocking at areas where grazing has normalised. Finally, Theofelus said the council must consider large-scale green schemes in the region for sustainable food production and to help food security in the region.

Cabinet took note that the OPM will submit the status report by September 2021 to the office of the speaker of the National Assembly for further inputs.