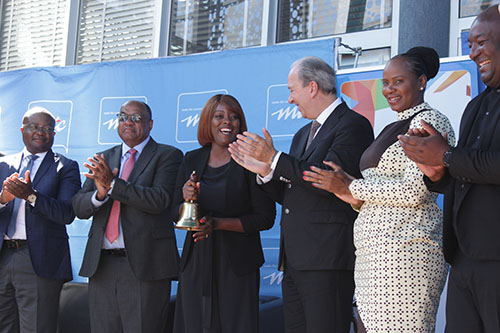 MTC raised a massive N$2.541 billion through the largest initial public offering (IPO) the country has ever seen, but fell short of the N$3.1 billion they had hoped to raise.

Analysts believe the current depressed economic environment, exacerbated by the pandemic, contributed to the under subscription as most individual disposable incomes have been obliterated during the last two years.

According to MTC spokesperson Erasmus Nekundi, the company received 5 611 applications with just over a total of 299 million shares applied for. According to Nekundi, a total of 299 045 261 ordinary shares were allocated to applicants for a total consideration of N$2.541 billion.

The public offer opened on 20 September 2021 and closed on 1 November 2021, through which the public was invited to subscribe for a maximum of 367 500 000 existing ordinary MTC shares. These were being sold by the existing shareholder at a subscription price of N$8.50 per share with the intent to raise N$3.124 billion to members of the general public in terms of the public offer.

However, Namibia Post and Telecommunications Limited (NPTH) will remain the majority shareholder of MTC, following the public offer as indicated in the prospectus.

While commending the successful listing of MTC and it having raised N$2.541 billion through the IPO, Jooste reiterated that the government’s decision to have MTC listed is to broaden domestic economic empowerment through ownership by ordinary Namibians in a profitable public enterprise.

He added this is to develop Namibia’s financial sector, as it is critical for economic development and to unlock maximum shareholder value. Jooste noted that consequently, the IPO was also intended to add value and liquidity for the Fiscus, whereby both institutional and retail investors’ participation is encouraged through the creation of investment opportunities in the Namibian economy.

“There is a perception that the decision to list MTC was taken simply because government needed to raise money. This perception is incorrect and the objectives that were agreed upon represent the true reasons for this decision that was in fact taken more than three years ago already as part of ongoing public enterprises reforms,” said Jooste.

The minister further acknowledged multiple challenges ahead to transform public enterprises, but assured Namibians of a solid understanding of the root causes and said a dedicated plan is in place to intervene appropriately in each and every case.

“It is totally unreasonable to expect that such an amount of negative momentum could simply be turned around overnight, especially under our current economic climate,” Jooste stated.