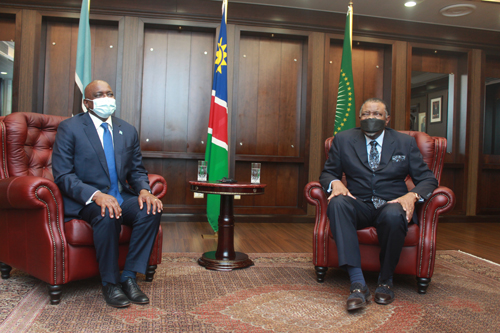 Namibia and Botswana yesterday reaffirmed their initial plans to jointly set up a multi-billion-dollar pipeline that would draw water from the Atlantic Ocean that will be shared as desalinated water by both countries.

In mid-2016, President Hage Geingob revealed during a function held at State House that the two governments were in discussions to pump desalinated water from the Atlantic Ocean through a pipeline that will stretch to Botswana. At the time, Geingob had said it is a regional project that will be commissioned between the Namibian and Botswana governments to tap water from the sea.

In the same year, Namibia and Botswana signed a boundary treaty that affirmed that both countries were looking into the possibility of investing in a desalination plant.

The signed treaty will jointly govern the use of the shared water resources between the two countries along three rivers, namely, the Kwando, Linyanti and Chobe.

Both Namibia and Botswana are semi-arid countries that face regular water crises that threaten the livelihoods of their citizens.

Botswana president Mokgweetsi Masisi, who jetted into the country yesterday for a one-day working visit, held a closed-door meeting with Geingob where together with their delegations also discussed modalities on sharing seawater.

Presidential spokesperson Alfredo Hengari said the meeting focused on the possibilities that exist between the two countries as water-stressed countries, especially Botswana which is landlocked.

“The possibilities of desalination are still on the cards.

“So the discussion focused on how Namibia can assist Botswana through the ocean sustainably to meet the needs of Botswana and Namibia,” Hengari indicated.

Asked when this dream would be realised as plans for the desalination project have been at the government’s door for so long, he defended the process, saying projects of this nature take time to complete.

“These are big projects and they take time. Feasibility studies in the context of Namibia have been made with regard to desalination. Those findings will be shared at an appropriate time,” he said.

“The relevant committees will study the possibilities of financial outlays and whatever is needed to require making this dream of strengthened cooperation between Namibia and Botswana a reality.

“That is the President’s articulated visions, ideas, and these ideas will be carried out by a technical team.”

Water affairs minister Calle Schlettwein, who also attended the closed-door meeting with Masisi and Geingob, said discussions were a continuation of both countries’ cooperation.

“It was just a continuation of our cooperation. Nothing was decided. It was just a working meeting where the desalination project and other cooperation were discussed. We were tasked to use the technical details that have been in existence to work out further details. There is nothing concrete for now,” Schlettwein told New Era in an interview yesterday.

Hengari said both countries share a very long border and both presidents share a special friendship that allows them to strengthen cooperation in various areas.

Equally, he noted, the bilateral relationship between the two countries has been upgraded to a level of Bi-National Commission and that implies strengthened political and economic cooperation.

“Visits of this nature will be frequent for the two heads of state to respond positively to the agenda of development.

“In the meeting, President Geingob informed his counterpart that as neighbours, the two countries should share aspirations and must have dreams,” Hengari stated.