Home / Namibia, Zim in a battle of warriors

Namibia, Zim in a battle of warriors 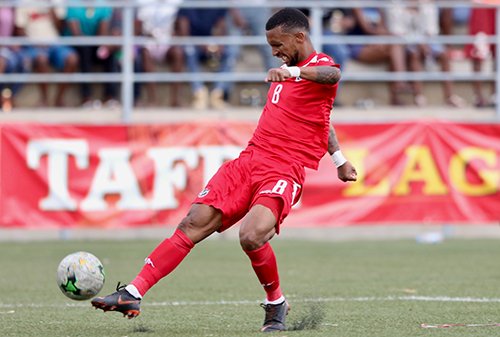 Namibia’s second Group B match against regional rivals Zimbabwe on Sunday is expected to be nothing short of a true battle of warriors, as the country’s Brave Warriors will be seeking to solidify their perfect start to this year’s Cosafa Cup against the awaiting Warriors of Zimbabwe.

The Brave Warriors, who are 2015 winners of the regional tournament, on Wednesday kicked off their 2021 Cosafa Cup campaign with a 2-1 hard-earned win over tournament guest participants Senegal.

Namibian highly-experienced skipper Awillo Stephanus believes the team has the required boldness and quality to go all the way in this year’s competition.

“It was a great start for us, as a team, by beating Senegal in our first match here – and going forward, the focus is on securing another win, so that we are guaranteed a place in the semi-finals,” he said.

“I have a good feeling that we can go all out and do it on Sunday against regional powerhouse Zimbabwe. We have been here before, and I believe we can do it again,” said a confident Stephanus, one of Namibia’s old-time campaigners at international level.

Reflecting on the lessons learnt from Wednesday’s victory, he said: “We initially went into the game with a plan to get a draw against Senegal, who is a powerhouse on the continent. But after the first half, we realised they have taller defenders, who are very slow, so we knew we could get behind them and we did that – and it paid off at the end of the day”.

Namibia’s head coach Bobby Samaria echoed Stephanus’ sentiments, saying they will be ready for the six-time champions of the tournament.

“This morning (yesterday), we took a couple of hours off but tomorrow (today), we will do a few light sessions. Zimbabwe is a very strong team, but we have strategies for different opponents – and we will have a different approach for Zimbabwe on Sunday.”

Namibia is currently top of Group B with three points, followed by Mozambique and Zimbabwe with one point each, while Malawi sits on the bottom of the group with no point.