Home / NamWater to revamp a section of Calueque-Oshakati canal

NamWater to revamp a section of Calueque-Oshakati canal 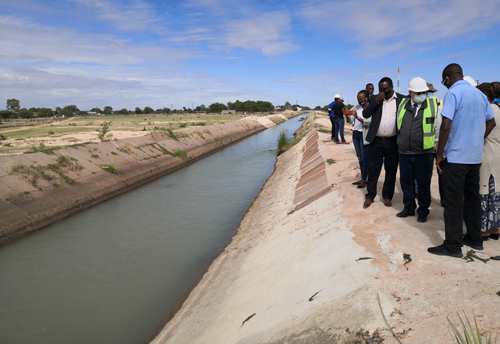 OMAHENENE – The water utility Namwater will spend N$93.5 million in revamping a 5.8km section of the Calueque-Oshakati canal that transport water from Angola to Oshakati for both human and animal consumption.

The work on the water canal that was constructed about 49 years ago starts at Omahanene further down to Olushandja.
Speaking at the groundbreaking ceremony for the renovation on Saturday at Omahenene, Minister of Agriculture, Water and Land Reform Calle Schlettwein said NamWater has over the years spent millions to maintain the canal to ensure water gets to the consumers without disruption.

“There comes a time when maintenance costs become unsustainable, such that total reconstruction of the canal becomes necessary,” said Schlettwein.

The minister expressed dismay of some community members who have deliberately engaged in vandalising the canal to catch fish or to create pathways for water to flow out of the canal for livestock consumption.

“Such practice needs to stop and I urge NamWater to work with law enforcement agencies to ensure that such culprits are brought to book,” said the minister.

In addition to vandalism, the minister stressed the water utility spends millions on electricity to pump water into the canal from Calueque dam.
Equally, the minister also stressed the proliferation of illegal off takes along the canal has become a major concern.
According to the minister, NamWater is struggling to get sufficient water to the Oshakati Treatment Plant, as the bulk of water it pumps from Calueque dam is used by the farmers before it reaches the treatment plant.

Although NamWater is currently in the process of doubling the capacity of the Oshakati plant, there are fears the new treatment plant may not be in a position to receive sufficient water to treat if more water continues being lost from the canal before it reaches Oshakati.
The new treatment plantis estimated at the cost of N$500 million.

The minister further stressed that whilst government encourages food production and is given hope by the uptake of farming in the region, pumping water out of the canal needs to be regulated and controlled so that equitable water supply to all the users is maintained.
“NamWater also needs to engage farmers to agree on a formula for equitable water supply, based on cost recovery principles,” said Schlettwein.

The governor of Omusati region, Erginus Endjala, said the canal plays a pivotal role in the livelihood of the inhabitants of Omusati.
He said the canal not only provides water for human and livestock consumption but communities also draw water for food production for the green schemes.