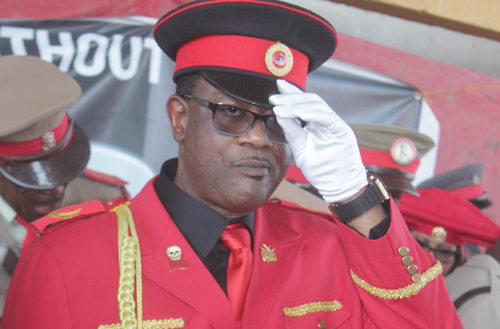 Namibians from all walks of life have started paying tribute to Ovaherero Paramount Chief Vekuii Rukuro who died early this morning in a Windhoek hospital. He was 66. His traditional authority had announced earlier this week Rukoro had tested positive for Covid-19. An astute business leader, former politician and lawyer by profession, Rukoro was at the forefront of seeking reparations from Germany over the genocide committed against the Ovaherero and Nama between 1904-1908. Namibians this morning took to social media to express shock as well as pay tribute to Rukoro.  “We commiserate with the Ovaherero community as well as the entire Namibia on the loss of Paramount Chief Vekuii Rukoro.

A career politician, a lawyer, distinguished corporate leader and traditional leader. He was straight forward, bold and charismatic,” PDM president McHenry Venaani said. The opposition leader also said President Hage Geingob had telephoned him in the morning and was “out of words in utter shock” over Rukoro’s passing. “When we mourn you, we mourn an outstanding citizen regardless of different views. We remember a worthy Namibian across the political divide,” said Venaani. “I fondly remember the periodic consultations we had and fondly remember the last round three weeks ago in my office. We agreed on what to be done on the genocide matter but differ on strategy but we both wanted a respectable outcome. Sad that I had to give him feedback only to be told he is hospitalised. We shall forge ahead in seeking a respectable deal for our people.”  Rukoro was one of the main drafters of the Namibian constitution when his then party Namibia National Front (NNF) gained one seat in the Constituent Assembly. After Namibian independence in 1990 Rukoro was appointed deputy minister of justice. He served until 1995 when, by then a member of Swapo, he occupied the position of attorney general. He entered a business career in 2000 as managing director for Sanlam Namibia, chairman of Air Namibia and CEO of First National Bank Namibia (2006–2013). Thereafter, he served as Meatco CEO until his retirement.