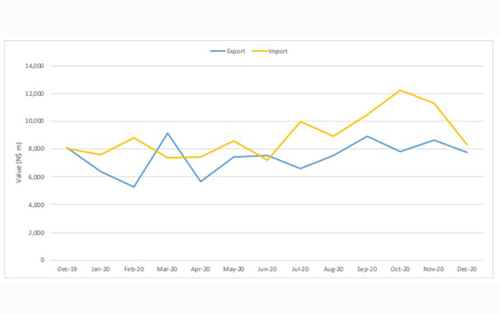 Namibia’s total merchandise trade with the rest of the world weakened by 19.7% from a level of N$20 billion in November 2020 to the current value of N$16 billion, while deteriorating by 0.5% from its level of N$16.1 billion recorded in December 2019.

The trade balance compares the country’s trade with the rest of the world in terms of earnings from exports and expenditure or imports.
During the month under review, Namibia recorded a trade deficit to the tune of N$546 million compared to a deficit level of N$2.6 billion recorded in November 2020 and a surplus of N$19 million recorded in December 2019.

NSA further stated that China emerged as the main export market for the country, absorbing 38.1% of all goods exported, ahead of South Africa in the second place, whose market share of Namibia’s exports stood at 13.6% of total exports.
Botswana claimed the third export position to account for 8.9%, while Belgium and Zambia occupied the fourth and fifth positions with respective shares of 5.5% and 3.9%.

During the reporting period, Namibia sourced her imports mainly from countries such as South Africa, Zambia, China, DRC and Spain when compared to the list of November 2020. These countries supplied Namibia with 76.3% of all import requirements needed by the country.
Non-ferrous metals, mainly destined to China, Belgium and Italy were Namibia’s largest export commodity during the month under review, accounting for 30.5% of total exports ahead of second placed non-metallic mineral manufactures, which accounted for 19.2% of total exports mainly due to the demand of this product by Botswana, Belgium, United Arab Emirates, and the United States of America.
- mndjavera@nepc.com.na