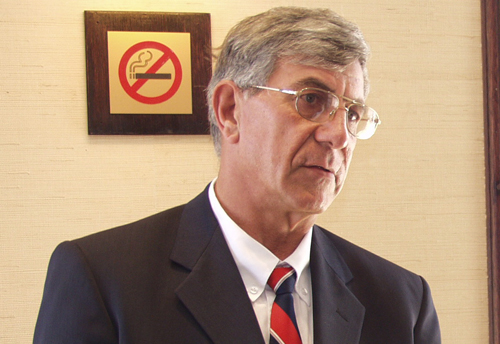 A medical doctor who conducted the autopsy on former Namibian Institute of Mining and Technology (NIMT) executive director Eckhardt Mueller revealed yesterday he was shot eight times, including twice in the head and three gunshots to the chest area.
The 72-year-old was also shot once in the right upper arm as well as in the lower arm.

Another shot broke his left ring finger. Testifying in the double murder trial before Windhoek High Court Judge Christie Liebenberg, Dr Augustu Gawab testified the autopsy revealed Mueller had several broken ribs and a fractured skull base.
He, however, pointed out that the fractured skull base was most likely caused when Mueller fell to the ground after losing consciousness due to a gunshot to his head.

Mueller and a fellow NIMT executive Heinz Heimo Hellwig (60) were gunned down on 15 April 2019 at the entrance of the NIMT offices at Arandis. Former NIMT lecturer Ernst Lichtenstrasser (59) is accused of killing the two executives. He pleaded not guilty to all charges against him this week. According to Gawab, Mueller was shot through the forehead just above his left eye with the bullet exiting at the back of his head and again through his nose with the bullet fracturing his nasal bone. He was also shot twice in the upper torso with the bullets fracturing several ribs and fragmenting. He further said that he found several fragments of the projectiles in the chest area during his autopsy. The doctor further explained that he found two entry wounds on the right upper and lower arm of Mueller and that one bullet broke his left ring finger. During his testimony, Gawab indicated Hellwig was shot three times, with the first bullet entering the left side of his chest exiting on the right side, followed by another shot just below the chest. This, he said, was followed by a shot to his right temple exiting at the left. Previously a matron supervisor at NIMT, Gertrud Noabes, testified that on the morning of the murders, she was at work at around 06h00 as usual. According to her, Mueller and Hellwig usually arrived at the campus around 06h30 and she could see the headlights of their car when they arrived. On the morning of the incident, she said, she heard a loud sound like dynamite exploding shortly after she saw the lights of Mueller’s car. The security guard, a certain Festus, then came running to her asking her if she too heard the sound to which she replied in the affirmative. “Festus then went to the entrance of the administration building and came back running telling her to call the police as the bosses were shot,” she narrated. She went on to say that she also went to the scene where she found Mueller and Hellwig in a pool of blood and that Hellwig was still alive and pointed with his right-hand finger in the air and tried to speak. He could, however, not get the words out and died shortly afterwards, Noabes who became emotional told the court.

Lichtenstrasser is facing two counts of murder, two counts of possessing a firearm without a licence, and further charges of possessing ammunition without a licence, defeating or obstructing the course of justice, theft and the unauthorised supply of a firearm and ammunition. The prosecution alleges Lichtenstrasser, a former lecturer at the Tsumeb campus of NIMT, shot and killed Mueller and Hellwig. The trial is continuing and the State is represented by deputy prosecutor general Antonia Verhoef and Lichtenstrasser who is represented by legal aid lawyer Albert Titus remains in police custody at the section for trial awaiting inmates at the Windhoek Correctional Facility.