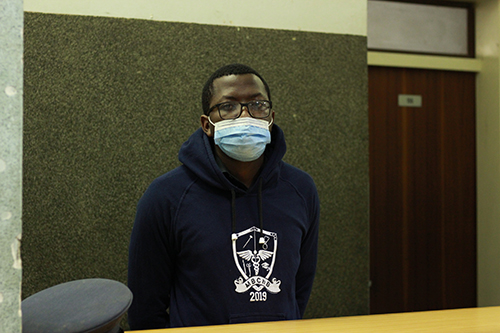 Medical intern Dennis Noa, accused of sexually violating an incapacitated patient at the Katutura Intermediate Hospital in April, was granted bail yesterday in the local court.

Magistrate Esme Molefe ordered the release of Noa (26) on condition he pays N$10 000. As condition of his release, Molefe also ruled Noa should surrender his passport and may not apply for a new one, pending the finalisation of his case.

Furthermore, he may not interfere with ongoing investigations and State witnesses – and may not leave the district of Windhoek without the approval of the investigating officer dealing with his case.

Handing down judgement, Molefe said the State’s notion that it has a strong case against Noa could not be the only reason to refuse him bail.

Noa has been in police custody since his arrest on 12 April on a charge of rape.

The State alleged the medical intern, stationed at the Katutura Intermediate Hospital, sexually violated an 18-year-old male patient on 11 April.

He has been an intern at the hospital for eight months.

In his defence, he indicated he is not guilty of the allegations as stated by the State, as he has taken an oath not to harm any of his patients.

He indicated the allegations against him are defamatory and malicious.

He informed the court that on the date in question, while on duty, there was an unresponsive patient due to a head injury he had sustained in a car accident.

He tried to locate a hospital porter but failed.

The investigating officer dealing with his case, Esther Kawiwa, testified they could not identify nor locate a person matching the description of the hospital porter as indicated by Noa.

Kawiwa further testified that according to the laboratory results obtained, no semen was found.

She informed the court that despite the results being negative for semen, it does not exonerate Noa.

She testified that the absence of semen does not necessarily mean that rape did not occur. It was her testimony that the Rape Act defines that rape does not only occur by means of insertion of a penis but other objects as well.

Kawiwa said according to the information at hand, on Sunday 11 April, Noa was seen by two witnesses, wheeling the victim from the head injury ward to the conference room, and locking the door behind them.

Noa was allegedly questioned by a witness as to where he was taking the patient, to which he answered he was taking him for physiotherapy, which is situated on the ground floor of the building.

However, the physiotherapy unit is not operational during weekends. Thus, there was no need for Noa to take the victim for therapy.

Noa is scheduled to return to court on 30 September after his case was postponed for further police investigations.

Noa was represented by James Diedericks, with Bernadine Bertolini prosecuting for the State.