Home / Notable record labels in the past 20 years

Notable record labels in the past 20 years 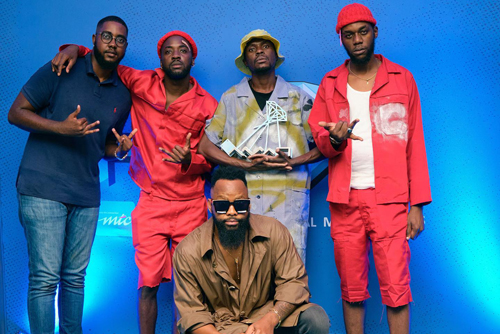 The music industry has been crippling for years now due to either lack of financial boosts, moral support and the constant quality of music that has been questioned and still is under scrutiny.

What many forget is the immense contribution by some industry players that have kept it afloat and that’s why Entertainment Now! backtracked some record labels, contacted the ones behind them to find out the type of investments and contribution they have put in the industry, the artists who are signed to their respective labels and overall stance of record labels in the country.

German-Namibian Kwaito artist and rapper Eric Sell, stage name EES established NAM FLAVA MUSIC in 2001 after realising that there weren’t any major labels which could push local music as they do abroad with Universal Music, Warner’s Bro and Sony.

“I noticed that I will have to start my label – it was called “EES Records” and I unofficially signed a couple of artists under the label right from the beginning producing for them and adding them on my albums. Then, around 2006 when I released my Album “NAM FLAVA” with hit tracks like “International” featuring Gazza. I changed the name of my label to NAM FLAVA MUSIC.”

EES said the name best described the whole movement and collection of music styles he does. In 2013, he officially registered the label on an international level – meaning with an “LC CODE” (Label Code 30070) – a code that a label gets which can be identified all over the world.
“If you want your music played on any international radio stations, your music has to have an official Label Code Number otherwise radio stations will struggle to play your music to the royalty system,” enlightened EES.

He added that one thing that many people don’t know about record labels is that they can only do so much for an artist – but if the artist doesn’t work along with the label, it becomes useless.

“This way of thinking that as a newcomer all you need is to get “signed” or a get a “record deal” and then you can sit back and they will do everything for you – those days are over. A label can only take your music if it’s good or relevant at that moment to the next level and support it through connections and know-how. If you don’t work hard – then it will not work 99, 9% out of the time,” pressed EES.
He said the industry has changed a lot in the last 10 years, as there is a lot an individual artist can do on his/her own nowadays in the digital age. EES said only the big artists that move numbers need record labels in his opinion.

He cautioned all upcoming musicians out there to just do their work until a label approaches them- and even then, they must carefully think if that is what they need for their brands.

Although NAM FLAVA has vowed to support local music, it currently has no artists signed to it according to EES.
“Well, I stopped signing artists under the label since 2014 – and went a new route, which is picking artists in the industry, which I want to help push and see if they are serious – and then support them with my label’s connections, know-how and distribution channels. The last artist I officially released was X-Bantuans since then I supported artists like Amazonkies, Fresh Family, House Guru Gang, Penilane, The Hunta, Hansolo, and many more,” stated EES.
Steven Naruseb, the owner of Welwitschia Music Production (WMP), established 2003 in the Erongo region said their aim is always to represent Namibia, to create an identity, a style that can be loved and liked by Namibians and especially to give hope, belief and be an example for the youth and community.
He added the label is an artist-operated record label producing professional-quality recordings in all major Namibian genres.
WMP currently has Stella, the Kapepo hitmaker who also specialises in Afro Pop, Gerry Dread - Reggae /Dancehall multi- awards winner, Genesa Handrick who has currently released her latest album called Aio (Jazz, Afro, ma/gaisa), Phono who is a popular Ma/gaisa artist, Rodney Seibeb –well known for gospel hits, Sarkie who does Ma/gaisa and some upcoming artists like Mr Cash Nesto.
“If you look at our record as a label, most of the artists that I have worked with are well-known and established in the country, for example Stella and Phura have streets named after them in Swakopmund,” informed Naruseb.

He added: “We are specialised in music event organising, marketing, distribution and music publishing. We are well equipped with an overwhelming worldwide vision, which is gathering strong local support daily. We are certain to hear more of our songs in parties, supermarkets; TV channels, radio stations, YouTube views, as it evolves into a household name in the country. With every show (live performances), we have been able to captivate and connect with the audience through engaging performances and mesmerizing live performance.”

Notable artists who were under the label include the late Phura, Raphael and Pele, Killa B, Allen Jonathan (Swartbaster), Setson and the Mighty Dreads, Lady May, Michael Seraun Owos-Oab, Dixon, Patricia Oxurus and many more.

Omlilo Records’ Waka Joseph said the label, which has been in existence since 2007 plans on releasing more songs although Mekox is lowkey for now.

“One of the best ways to boost the industry is to give opportunities to artists out there and that’s what we intend on doing. We will announce them as time goes by but for now, we are waiting for the right time. I am currently working on a new album as we speak,” said Waka.
He stated: “The mandate of the label is to promote and give opportunities to local artists in any way it can.”
Other notable labels that are worth mentioning and recognizable although some are non-existent are Izinyoka, Gazza Music Production (GMP), Mshasho Records and Sunny-Boy’s Yaziza Entertainment.
- psiririka@nepc.com.na