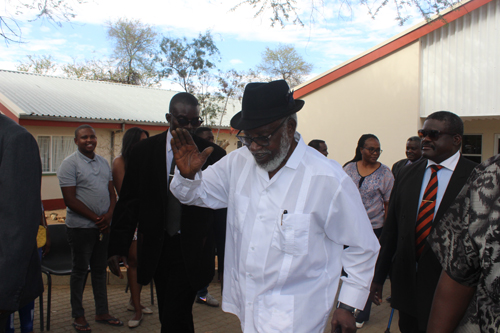 The Presidency has dismissed allegations as unfounded that Founding President Sam Nujoma is hospitalised and in bad health.
An unidentified woman  in an audio voice note  alleged Nujoma was struggling to talk, while claiming that such a sad health status is because he is saddened by the ongoing challenges and infighting within the ruling Swapo.

The same voice challenged the authorities to tell the nation the truth about the current health of Nujoma, questioning why the government and the media were quick to reveal that Nujoma had contracted Covid-19 last December.
Press secretary Alfredo Hengari yesterday said the Presidency has noted with concern baseless and unwarranted allegations about the health of the Founding President.

“The Presidency wishes to assure the nation that the Founding President is doing well and there is absolutely nothing that should be of concern to citizens.

Therefore, it is wholly deplorable that there are malicious individuals who are peddling fake news, misinformation and disinformation about the health of the founding president,” Hengari reacted.

According to him, such acts are nothing but an attack on the integrity of the Founding President, who should be allowed the necessary privacy without undue conjecture and rumourmongering about his health.

The Presidency noted Nujoma gave up his youth and sacrificed immensely in the fight for the liberation of Namibia, a feat achieved on 21 March 1990 and at great cost in terms of brave and innocent lives lost, including other material damage.
Therefore, Hengari said, it deserves further emphasis that he worked tirelessly to build and develop an independent Namibia, a task which he says Nujoma performed with extraordinary ability until retirement on 20 March 2005.

“In light of these significant contributions to our wellbeing as Namibians, the least to be done is to extend the necessary courtesies and respect to a national icon. The undesirable speculation about the health of the founding president is lamentable and should seize forthwith,” he encouraged.

Equally, the Presidency called on reporters, journalists and the broader Namibian public to desist from relying on fake news sources and gossip, whose objective is polluted disinformation and only to create undue panic within the population.
Hengari maintained the Namibian government is committed to transparency and accountability, which implies a robust commitment to informing the Namibian public about significant developments in the country.

Therefore, for social cohesion, Namibians are fortified to remain vigilant in the fight against fake news and misinformation – and only rely on verified sources of information.
- anakale@nepc.com.na