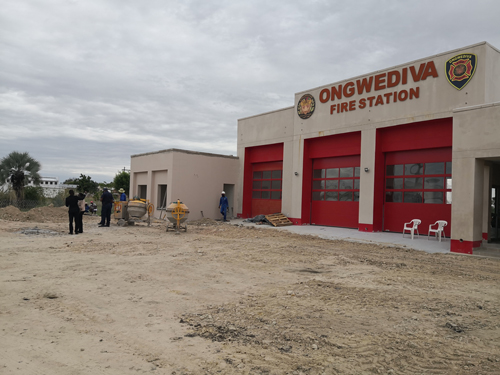 ONGWEDIVA – In its quest to improve fire response at the town, the Ongwediva Town Council is in the process of constructing sleeping quarters and a guard’s room valued at N$1.5 million.

Spokesperson for the council Jackson Muma said the council seeks to improve the response time from the current 12 minutes to at least five minutes during non-working hours, weekends and public holidays. Although during working days the team is stationed at the fire station and can respond to incidents timeously.

At the moment, the council responds to on average five incidents in a week depending on the season.
Altogether, the council last year responded to 250 fire incidences.
So far this year, only one incident has been recorded.

Muma said fire incidents are more prone during the dry season as more people tend to engage in deliberate arson within the town.
The first phase of the fire station was constructed in the 2015/16 financial year.
The second was completed during the 2016/2017 financial year.
– nashipala@nepc.com.na