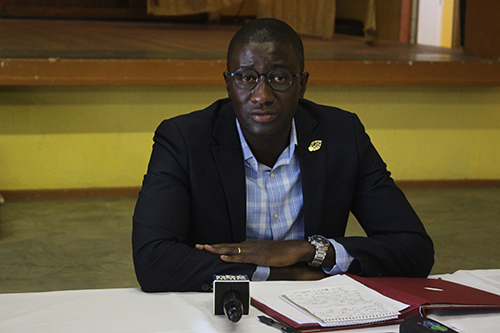 Otjozondjupa governor James Uerikua says the region’s technical system and infrastructure permits the implementation and harnessing of the fourth industrial revolution (4IR) as an opportunity for the youth to reap the benefits.

“Education support has transformed the region, and there is a need to strengthen our participation in the 4IR, through increased sustainable investments in technology infrastructure and skills development,” Uerikua said during the 2021 state of the region address this week.

He added that the regional business and private sector has noticeably improved – and through creativity and innovation, they have resorted to online or e-governance to harness the 4IR benefits and opportunities in their daily business operations.

According to Uerikua, the region has noticed an increased use of e-governance services, as up to 35% of businesses in the region are using online services, specifically in the technological boutique and fabric sectors during this reporting year.

“We encourage young people to take this opportunity and capitalise on them optimally by being active players,” Uerikua said.

Furthermore, the governor stated that the region’s economy has not been growing at the desired pace.

“Equally so, unemployment has also increased due to the fact that most businesses had to retrench, lay off or reduce workforces for them to keep running their businesses during this challenging time of the Covid-19 pandemic.”

The governor noted that the major focus of the region in terms of economic progress remains to revive the economy and to keep it afloat, despite the difficult economic times.

“The region is in a resilient, responsive and socio-economically stable state, with room for improvement with strength and support from all sectors. The region is also not an exception in terms of government and private sector social interventions to help the most vulnerable inhabitants to mitigate the effects of this virus,” added Uerikua.

During his annual address, the governor noted that for the period under review, N$10.2 million was spent on the drilling and rehabilitation of boreholes to address water shortages in communal areas. Under the rural service projects, 232 toilets were constructed in various constituencies at a total cost of N$1.5 million.

Also, some N$500 000 worth of livestock and chickens were procured and distributed in various constituencies for improved agricultural production and food security.

Furthermore, a leather project at Gam settlement in Tsumkwe constituency was commissioned to the tune of N$1.2 million directly assisting 10 beneficiaries.

“The horticulture self-employment project, which targets unemployed youth, has managed to employ six youth for the year 2020 and 2021. Agribank, in addition, had launched a woman and youth scheme to encourage the participation of women and youth in the farming activities,” noted the governor.

Uerikua indicated that the region’s strength and ability to contribute to the national economic progression is driven by its competitive advantage in terms of geographical and ecological zones for livestock, agronomic and game farming, as well as tourism.

On a related note, President Hage Geingob this week appointed a 4IR Task Force that is required to conduct a country assessment to determine the national readiness for 4IR and make recommendations towards a coordinated and coherent policy and legislative framework. - mndjavera@nepc.com.na