Parents tricked into giving away children 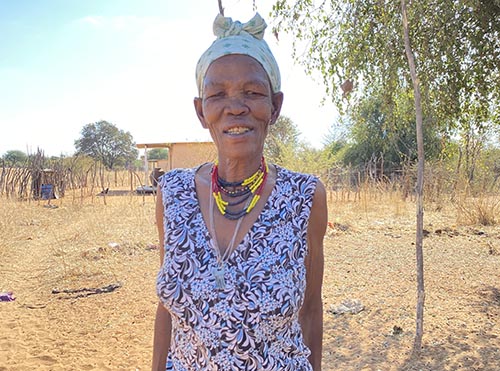 EENDOBE - Johanna Abraham still remembers vividly what happened when her son was stolen after she was given fish by an unknown man at a pension pay point in the Okongo area of the Ohangwena region.

Abraham said she visited the pension pay point with her husband when an unknown man offered her fish. Because she did not have a baby carrier, she gave her son to her older sister,
Lucia Hamunyela, while she took the fish to a tent. Upon her return, she was told by Hamunyela that her son was taken
by the man who gave her fish.

“He tricked me,” she said. “I haven’t seen my child since. ”The man who allegedly took the child out of Hamunyela’s arms never brought him back. “I looked all over the whole place; I couldn’t find my son or that man. But I still have his image in my head, and if I see him, I would still be able to identify him,” she added. She cannot recall the exact year it happened, but suspects that it was some time in the late 90s or early 2000s, and her child was breastfeeding at that time. She also doesn’t recall when her child was born. Abraham (63) is a member of the marginalised San community settled at the Eendobe San Community Centre in the area of Okongo.

She has been looking for her son for many years, but has given up now. Abraham is convinced that by now, her son has been given a new name and is probably even married or having children.

His name was Alfeus Hamutenya. Approached for comment, Hamunyela, who also lives in the centre, told New Era that she doesn’t recall what exactly happened or what exact words she was told when the child was taken away from her arms.

Hamunyela is not so chatty, but said she was holding the child when it was taken. Abraham’s situation is not unique. She is part of a generation of San mothers whose children were either taken by people pretending to be good Samaritans and offering to raise the children on their behalf but never return them, or involuntarily giving their children up for adoption because they do not have the means to take care of them.

Paulus Pinehas, also a resident of the centre, has lost two younger siblings in the same way. Although it has now been years since her sister Ndakulilwa and his brother Epaphras Pinehas went missing, he is still extremely upset and desperately looking for them. Ndakulilwa was five years old when she went missing some 10 years ago. She also disappeared at a pension pay point in the area of Okongo. Pinehas suspects that his sister was taken by the vendors who were selling clothes. “I don’t really know how she disappeared because she was with my mom at that time. But she told me the child was taken by a woman who promised to go and take care of the child, put her through school, and bring her for holidays. Till now, I don’t know where Ndakulilwa is,” he said sadly, adding that his mother would likely have had more information on the disappearance of the child, but is now deceased.

Meanwhile, Epaphras was 15 years old when he went missing in 2016.

Epaphras apparently just left the centre to go and do odd jobs in nearby villages, but never returned. “I am relentlessly looking for my siblings. If there is anyone who has taken my siblings or seen them somewhere, please notify the councillor or the police,” Pinehas pleaded. In an interview with this publication, the centre’s caretaker Rachel Nekongo said theft and the illegal adoption of San children is rife, but it remains unreported.

She has been working at the centre for about two decades. “For so many years, people have been illegally adopting San children, or even stealing them from their mothers. But the authorities are not aware of it because San people do not report these cases. They also do not know their rights,” stated Nekongo.

“As their caretaker, I closely monitor them, or else children will keep disappearing without people noticing.”

Asked if cases of missing persons or the illegal adoption of children were reported to the authorities, Nekongo said so far, four children from the centre are missing, but only two of the recent cases were reported.

“I was not aware of the other two cases until recent years when I heard people speaking about it. I am yet to get more information about it,” she added.

On Monday, the Presidency, through the division of marginalised communities, launched an advocacy and awareness programme at the centre.

The month-long programme aims to address human rights issues among the San people. Some of the pertinent issues to be addressed included crime, violence and the illegal adoption of the San people. Speaking at the launch, social worker in the ministry of gender equality Aune Valombola advised the community to be cautious and to refrain from giving their children up for adoption without following the right procedures. “A child cannot just be adopted by anyone. They need to follow all the legal channels through the ministry of gender equality that enables them to adopt the child or take care of the child. This is to safeguard the rights and best interests of the child concerned, as well as the rights of the adoptive family and the biological family,” she emphasised.