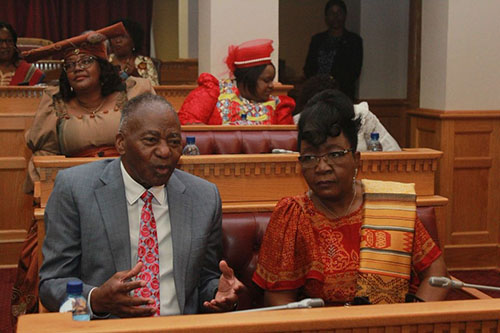 Director in the speaker’s office Simon  /Uirab has explained the parliamentary budget committee, saying the committee shall be part of the speaker’s consultation team with the finance ministry as well as the director general of the National Planning Commission (NPC) during the budget consultation process.

/Uirab said the select committee shall review all aspects of the planning, budgeting and financing of all activities of the National Assembly.

“The select committee shall monitor the financial performance of the National Assembly to ensure programs are executed as planned,” /Uirab explained.

He added the select committee shall also consider and report to the Committee on Standing Rules and Orders and Internal Arrangements (CSROIA) on any other matter of budgeting or finance as may be referred to it by the speaker or the CSROIA.

/Uirab said the select committee may call on the secretary or any staff member from the secretariat to appear before it and provide information needed for the formulation of the budgetary allocation of the National Assembly.

“The secretary shall designate the financial adviser of the National Assembly or his/her representative to be part of the secretariat of the select committee,” he explained.

He said the selected committee shall also consider any other matter related to its terms of reference assigned to it by the CSROIA.

Dingara told MPs the establishment of the committee is in line with best parliamentary practices globally.

“Many legislatures globally have establishments like the budget office and budget committees,” Dingara said, adding that such structures will ensure parliament is adequately served in terms of finances and ensure prudent spending thereof.

“It also helps parliament to meet its expectations required in terms of its mandate and what the electorate expects by the provision of efficient and effective oversight functions,” he said. The Swapo parliamentarian said, as MPs, they often find themselves during the debate of the appropriation bill bemoaning the lack of adequate funding for the National Assembly.

“The creation of this committee will allow us, as a team, to play an integral part in the planning of our programmes, prioritise and ensure successful implementation thereof,” he stressed.

He also used the opportunity to assure fellow MPs that the committee is not being created to increase already existing bureaucracy or bottlenecks in the execution of fiscal responsibilities of the August House but to improve the legislature’s budget planning processes and the execution thereof.

“This will also ensure that parliamentary standing committees are adequately provided for. Through effective budgeting and implementation, we could provide timeous oversight function and thereby eliminate poverty and inequality, which are the key objectives of the national development plans,” he said.

He said the committee will also seek to strengthen the effectiveness, cohesion, accountability and capacities of the system to better support MPs and the secretariat and to help Namibia to accelerate progress in the implementation of the nation’s objectives.