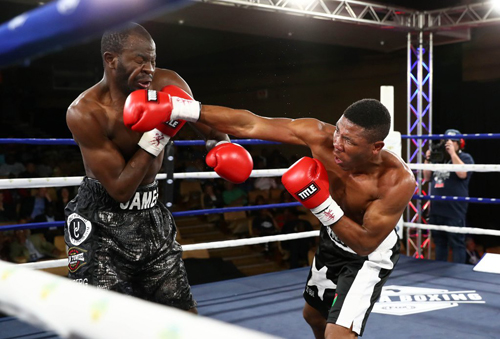 Memorable moments of your career? My memorable moment was the first time I travelled by plane for a fight in Swaziland against Junior Makondo in 2018. It was very exciting, as it was my first time boarding a plane – plus, I also won that fight.

Who is the biggest influence on your career? I was influenced by a lot of people. I grew up with my uncle, Jeremiah Vanyika, who had a boxing club and he was a former boxer too. He used to tell me how good boxing is and how he enjoyed boxing during his heyday. I would help my uncle train the small boys at the club until I decided to give it a shot – and that is how I ended up in boxing.

Apart from boxing, which other sports do you most enjoy? I used to enjoy kickboxing because it somehow relates to boxing, but my first love has always been boxing.

You are one of the top-ranked junior middleweight boxers in Namibia, how has the journey been, getting to where you are today?
I am very glad to be ranked number one in my weight category in Namibia and I am pushing hard to be well ranked in Africa as a continent as well. The only challenge I face is being a top-ranked boxer makes it hard to find other top-ranked fighters with whom to compete; they are hard to find here in Namibia. Meaning, you have to get someone from outside to fight you, and that is a bit challenging on the finances.

Do you think upcoming local boxers are granted enough platforms and opportunities to showcase their talents, especially when speaking from a development standpoint? We are very grateful to the few promoters in the country who are trying hard to groom upcoming boxers and helping them reach their full potentials. The problem is also that boxers are a lot in numbers and promoters with well-established gyms are very few here in Namibia, so perhaps we need more promoters to come through and give these youngsters opportunities to realise their dreams.

Generally, what’s your take on the current state of Namibian boxing? Namibia is a country blessed with a lot of talented boxers – and that is despite our very small population. And I always say with a bit of more support from the business community and government on the side of infrastructure development, Namibia will in no time become a top boxing nation in Africa – if not the world. The talent is there; what we need is just support.

Your ambitions for 2021 and beyond? I am very eager to become a continental champion in my weight category – and right now, my management team is pushing hard for me to fight for an African title, as such a move will see me improve my world rankings and set me up for bigger fights. Personally, I have continuously been working hard to refine and strengthen my skills, as I want to become an accomplished world-class boxer.