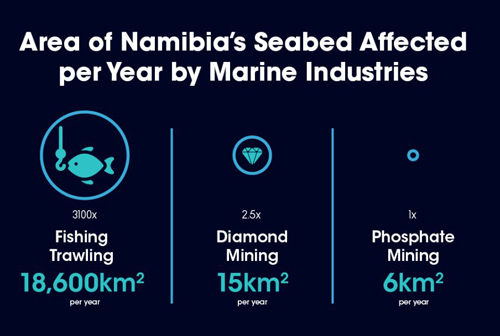 To ensure the co-existence of marine diamond and fishing industries can continue and their environmental impact is kept to a minimum, both industries are monitored and managed. According to the Chamber of Mines of Namibia, the same approach should also be considered for marine phosphate mining in Namibia, which has a comparatively smaller footprint in the marine ecosystem and will not encroach on any of the commercial activities in the marine space.

In a recent article titled “Can Phosphate mining co-exist with Namibia’s commercial marine activities?”, the Chamber noted that seabed mining in Namibia is not a new commercial activity.

To support these claims the Chamber points out that the combined annual footprint of the proposed phosphate mining projects is significantly smaller than marine diamond mining and fish trawling.

“Marine diamond mining and commercial fishing have co-existed, harmoniously, in the same marine ecosystem for over 25 years with adequate mechanisms in place to monitor, control, and evaluate their impact on the marine environment. The scientific evidence available, and a comparison of other areas employing similar mining methods, confirm that a mutual and harmonious co-existence of sectors is possible and the inclusion of marine phosphate mining into the marine ecosystem will neither be detrimental to Namibia’s fishing sector nor her environment,” the Chamber’s article reads.

“For over 25 years, the marine diamond mining industry has co-existed in the same marine ecosystem as the fishing sector, allowing for both industries to become major economic contributors,” the Chamber stated.

The article continued that since 2012, a conflict between the proponents of phosphate mining and commercial marine activities, which the Chamber said is fuelled by misinformation, suggests a scientifically unsubstantiated threat of potential catastrophic and irreversible damage to the marine environment and the collapse of the fishing industry.

However, the Chamber is adamant that a considerable volume of site-specific surveys, scientific studies, evidence and expert opinion conclude that marine phosphate mining, like marine diamond mining, will present no significant harm to the Benguela marine environment, can coexist without posing any threat to the commercial fishing industry and can contribute significant socio-economic benefits that are far greater than the costs to the environment, as is the case with marine diamond mining.

The Chamber’s article further noted that in Namibia seabed mining for diamonds and phosphate both utilise seabed dredging technology. Similarly, the United Kingdom’s marine aggregate mining industry (consisting of a fleet of 28 dredgers) has been operating for 30 years and is a similar dredging operation to that proposed by the marine phosphate industry in Namibia, only at shallower water depths. These vessels remove the top layer of sediment and transport the material to shore

“Globally, there are many current examples (United Kingdom, Belgium, Netherlands, Norway, Sweden, to name a few) where marine commercial industries, including seabed mining/dredging, oil and gas, and fishing, have co-existed effectively for many years based on the application of accepted management principles and structures for co-existence,” the article reads.

The Chamber of Mines article further states that using similar dredging processes, seabed and environmental impacts of both marine diamond mining and phosphate mining operations are comparable. However, the scale of impacts differ due to the sizes of the mining areas on the seabed.

“Marine diamond mining impacts a larger area and affects greater expanses of the ocean floor ecosystems than the envisaged phosphate mining activities. Commercial demersal fishing operations (bottom trawling) also impact the seabed and marine ecosystem but are undertaken at a far larger scale than both the current and proposed seabed mining operations,” the article asserts.

The Chamber is also of the opinion that while abundant conclusive physical evidence indicates the impact of seabed excavation for marine diamond mining does alter the habitat in the mining area, it is not significant at the scale of the operations when compared to the overall marine ecosystem and that in fact the seabed does recover over time, albeit at differing rates

In Namibia, given the small size and scale of the proposed mining activities, a comforting element is that adequate controls and measures already exist in current legislation to regulate marine phosphate mining activities, alongside existing commercial marine activities (Minerals Act 1992, Environmental Act 2009).