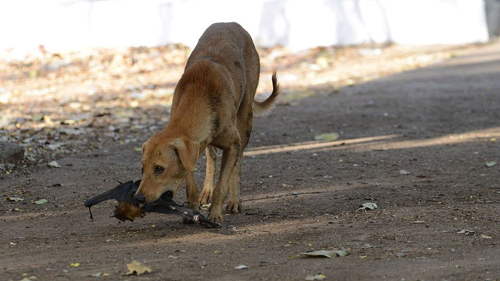 Rabies is a viral disease that spreads from the saliva of infected animals to other animals and people usually through bites.
According to a research on ecology and epidemiology of rabies in humans, domestic animals and wildlife in Namibia (2019), 113 cases of rabies in humans were reported from 2011 to 2017 mostly at the northern communal areas.
Rabies causes nearly 59 000 human deaths per year worldwide and around 99% of cases are due to dog bites according to the world animal health organization (OIE).

It’s amazing that people are not aware of rabies in our country despite it being one of the deadly zoonotic diseases. In spite of rabies campaigns being done here and there in the country, many people are still not mindful of it. It is therefore of utmost importance that communities support the government in its effort to reduce rabies incidences in Namibia.

All mammals (animals that breastfeed their young ones) can transmit this virus. Animals like dogs, cats, cattle, goats, horses, bats, monkeys, raccoons and others, can transmit rabies to people. The spread in dogs can be increased when dogs meet during mating congregation, as fights among them happen during this time, so as in cats.

It is therefore important that pet keepers embark on sterilisation of their pets as a means of reducing unwanted breeding which results in many stray pets. Stray pets are risk animals as their health in terms of vaccination is usually unknown. In male pets, sterilisation reduces aggressive behaviour and reduces incidences of them wandering around in search for mating.

When a person is bitten by a rabid animal, it may take up to 10 years longest to show clinical signs of rabies depending on the site where he or she got bitten. You must seek medical care as soon as possible after you are bitten by an animal, mostly by dogs, whether it’s vaccinated or not, it’s not negotiable. The bite wound must be thoroughly washed with clean running soap water.

Most rabies cases are seen in children because they play with home animals compared to adults and they don’t report it when they are bitten. In situations like Covid-19 where kids needed to stay home for more hours, the interaction time with house pets is increased, therefore pets’ health is even more necessitated by that fact.

It’s on that ground that you must get your animals vaccinated, mostly pets, dogs and cats at an early age to prevent unforeseen circumstances. When a person shows rabies clinical signs, the disease is 100% fatal.
Common signs of rabies in different species
Dogs and cats can show aggression, barking and circling in dogs, fear of drinking water, excessive salivating (be cautioned, don’t open its mouth)

Wild animals like Kudus and Elands may roam around, not afraid of people.

Cattle may bellow, be aggressive, salivate or may show increased mating behaviour either male or female.

Prevention
Remember: Prevention is better than cure, however, there is no cure if one shows rabies clinical signs.

1. Vaccinate your pets. Dogs and cats can be vaccinated at an early age mostly in countries like Namibia where rabies is very common. This vaccination is given free of charge at government veterinary hospitals. In endemic areas vaccination schedule in dogs may look as follows, first shot at three months old, 2nd shot after six months, 3rd shot after nine months, 4th shot after 12 months and then annually according to OIE.
Your veterinarian may change that depending on rabies epidemiology in your location.

2. Avoid stray dogs and cats. Get your pets spayed and or castrated to prevent them from reproducing unwanted animals, which pose a risk of transmitting rabies in streets. Castrated and or spayed animals are easily kept at home.

3. Keep far from unafraid wild animals and report them to your nearest veterinarian.

4. Remove bats from your house and report all bat bites, even when you are unsure whether you are bitten or not.

5. Get vaccinated, mostly if you work with dogs and cats daily.

So, every human bitten must visit the nearest hospital as early as possible. Livestock can also be vaccinated against rabies.