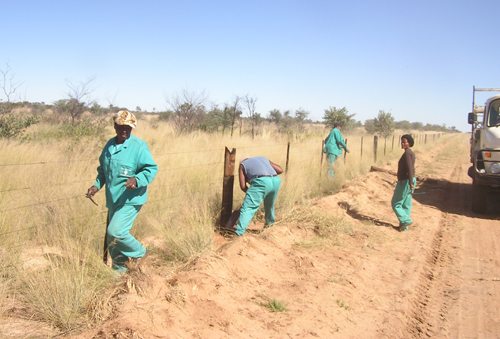 Communal farmers in the Kavango West region have once again bemoaned the existence of the Veterinary Cordon Fence (VCF), also referred to as the “red line”, saying it is depriving them an opportunity to market their livestock to other parts of the country.
The red line was erected in 1896 as pragmatic disease surveillance and exclusion fence, separating northern and central Namibia to southern Namibia.

Local farmer Oiva Mahina, during a consultative meeting with agriculture minister Calle Schlettwein last week in Nkurenkuru, argued the red line is making it difficult for farmers to progress in the region.

“In terms of what you are putting in the specific business you are doing, you need to go and borrow money from the commercial bank or state-owned banks,” he said.

He added, this is, however, challenging, as he is not aware of any special fund where northern communal farmers can borrow money at the lowest interest rate.

“Currently, if you go and borrow and say I will pay off my loan through my business as a farmer, you will end up in debt and losing your valuable assets,” Mahina claimed, adding the red line cannot be a guarantee for the next 30 years for communal farmers.
On his part, Schlettwein informed farmers the government previously made it possible for both northern and southern farmers to have equal prices through facilities that were put up in different regions.

This, he said, allowed the utilisation of beef produced in the communal area, as there was an agreement with neighbouring countries to export the meat despite it being from north of the red line, provided the operating standards are correctly followed by the abattoirs.
Schlettwein added this unfortunately collapsed when South Africa closed their border.

“We, all of sudden, sit in a very unfortunate situation where we have only the domestic market in the northern communal area that could be satisfied and it has a very negative effect on the farmers,” he stated.

He further informed the farmers that government is looking at revisiting trade agreements with China and the Southern African Development Community (SADC) to allow the export of Namibian beef produced north of the red line to the Asian country.
He also said government has embarked on an infrastructure development programme aimed at creating facilities for producers to comply with quality-based trade.

This includes abattoirs that are registered and certified for trade, quarantine and beef processing facilities.
He also assured farmers the programme is almost ready, as there are four registered abattoirs already opened.
“This will create local market opportunities for farmers to market their surplus of cattle,” he said.