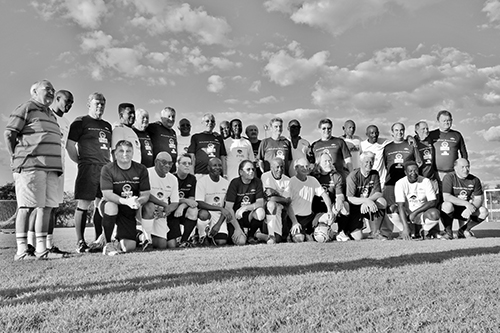 Emotional Reunion…Ekkies (2nd from right - front row) with jubilant members of the South West Africa blacks and whites combined football team during the reunion ceremony in 2017, 41 years after the historical exhibition match between the SWA Blacks and Whites in 1976.

The 1976 exhibition football match between the South West Africa (SWA) blacks and their white counterparts staged at the jam-packed Suidwes rugby stadium will go down in history as the turning point of domestic football.   The match, played in front of an enthusiastic sold-out crowd, was the second encounter between mixed-race athletes in the then-Apartheid SWA after the first match ended in a controversial three-all stalemate at the same venue a year earlier. It ultimately paved the way for the inevitable amalgamation of a mixed-race league that saw blacks, whites and coloureds/basters all playing under one unified umbrella body.

Eckhardt was born on a commercial farm approximately 35 kilometres south of Otjiwarongo in 1956. He grew up in a village by the name of Ombujomumbonde, holed up in the Okakarara constituency.

With no recreational facilities in sight, let alone any sporting activities taking place in the remote village, the young boy only came to watch football matches when he moved to Otjiwarongo to start his primary school at the age of 10.

As it turned out, he fell madly in love with the spherical object, and there was no looking back from the day he entered one of those uneven makeshift football pitches in the Native location. His interest in the game intensified when he started watching the hotly-contested local derbies, especially the traditional derby between Life Fighters and Black Marokko Chiefs (BMC), as both teams muscled each other out for tribal supremacy.

He was also fascinated by the equally bitter rivalry between the trident of Orlando Tigers, African Lions and Dodgers football clubs. These matches inspired him to become the number one supporter of the game.

Attending a multi-cultural school, Eckhardt was in absolute awe of the amazing ball skills demonstrated by fellow pupils, notably the late trident of Anton ‘Stouter’ Oxurub, Gottfried ‘Lewa’ Awaseb and Fillemon ‘Fly’ Damaseb, who inspired him during their time together at the town’s Roman Catholic School.

A significant chunk of the school’s learners would resurface at the revered St Joseph’s Secondary School (Döbra), situated north-east of Namibia’s commercial capital Windhoek, to further their academic aspirations. However, Eckhardt went in the opposite direction as he chose the Martin Luther High School (MLH) as his preferred destination upon completion of his primary school studies.

The football-crazy boy wasted little time and hit the ground running, joining a hostel team upon his arrival at MLH, from where he kept a close eye on Döbra.

He was overly impressed by the performance of big-name stars such as the devastating Hans siblings – Meester Willem, Johannes and Mickey – cool-as-a-cucumber centreback Gabes Dausab, Corrie Uri-Khob, and Sebastian ‘Stu’ Damaseb, amongst a galaxy of football stars.

He started out in the outfield position as a right fullback, and vividly remembers one particular afternoon when the Otjiwarongo Roman Catholic Mission School confronted fellow missionaries Maria Bronn Roman Catholic School, which had former Tigers sharpshooter Steve Haihambo in their armoury.

“Our goalkeeper did not pitch up for the said match, and it so happened that I was requested by our coach, Mister Kgobetsi (Odillo Kgobetzi’s old man), to shift in between the sticks. Well, that was to be the turning point of my football career. I made the number one jersey my property from that day on, and would go on to represent the Northern Schools Invitational team against other zones. I played against the late Aupapa Shipanga and others representing the West”, recalls the now-retired schoolteacher with a twinkle in his eyes.

His impressive performance for the school’s football team caught the eye of Life Fighters’ talent scouts, and Eckhardt was rightly fast-tracked into Kahirona’s first team at the age of 17 to succeed the ageing stocky and agile shot-stopper, the late Alphons Tjikoriho Njembo, and as they say, the rest is history.

Eckhardt went on to play an instrumental role in the squad’s smooth-sailing transformation, nurturing highly-gifted incoming youngsters, spearheaded by the slippery-attacking midfielder John ‘KK’ Kake, Toy Heuva and the recently-departed hard-tackling fullback Eliah Tjaverua. A fair number of young footies were also roped in to bolster the squad in the intervening years.

Strongly-built sharp-shooting striker Moses ‘Five’ Kandingua shepherded the new arrivals which included calculated football-playing centreback Ruben ‘Beau’ Kake and Sipho Kauripeke. However, his breakthrough came around 1976 when he travelled to the city of bright lights (Windhoek) as guest player for bitter rivals BMC to participate in a knockout cup tournament.

Here, he found himself exposed to the real world of competitive football, facing the likes of Katutura giants Orlando Pirates in their own backyard. This was enough to send butterflies running riot in his belly. Nevertheless, BMC had the two devastating Jomos in their line-up, masterminded by dribbling wizard Linton Aseb and the hard-tackling Martin Uwu-Khaeb.

The Buccaneers had amazing scary weaponry in their arsenal, with players like the late Steve Stephanus, Ambrosius Vyff, and former BMC proteges Fly Damaseb, Ananias ‘Bigman’ Nanuseb and Lewa Awaseb.

“Eish, we scored what looked like a legitimate goal via the educated boot of one of the Jomo’s, and stood on the verge of a historic victory. But to our surprise, and in all likelihood the neutral fan, the match referee – the late Coloured Kakololo – controversially ruled out the goal for reasons only known to himself”.

Nonetheless, the agile shot-stopper must have done enough to attract the attention of football lovers. Ekkies became a much-sought-after hot property afterwards. It came as no surprise when he was deservedly called up for the All Blacks Invitational Eleven against their white counterparts in 1976.

The blacks narrowly lost 2-1 after Oscar Mengo, who had just returned from a professional stint with Soweto giants Kaizer Chiefs, had his weakly-taken spot-kick easily gathered by the big-framed Vic Lovell. That particular match ultimately shaped the immediate future of domestic football. It opened the door for the unavoidable birth of multi-racial football in Apartheid South West Africa the following year.

In the interim, Ekkies joined Katutura glamour football club African Stars for a brief period, but found the going tough to dislodge the regular net guard, the acrobatic Asaria Ndjiva Kauami, from the pedestal.

He eventually retreated to his native Otjiwarongo, where he assumed the plum portfolio of a well-respected schoolteacher, a position he held for close to 39 years until his compulsory retirement. In-between his blossoming football career, a profoundly unpleasant episode unfolded when the likeable goalie decided to jump ship and join local rivals BMC, much to the chagrin of Kahirona’s diehards.

Subsequently, Ekkies was drafted into the black and white outfit’s starting line-up in a scheduled match against his former team, but Kahirona would have none of that. The envisaged match was eventually disrupted, and it took the timely intervention of elders, under the stewardship of the late uncle Obed Mavenjono, to persuade the want-away shot-stopper to remain put.

As a former student of the militant MLH, young Ekkies has often been at odds with law authorities, and tried to skip his motherland on numerous occasions, albeit with minimal success. The now-retired schoolteacher is a self-confessed number one supporter of Tigers Football Club in the Otjozondjupa region.