Rising from Blikkiesdorp’s sea of shacks 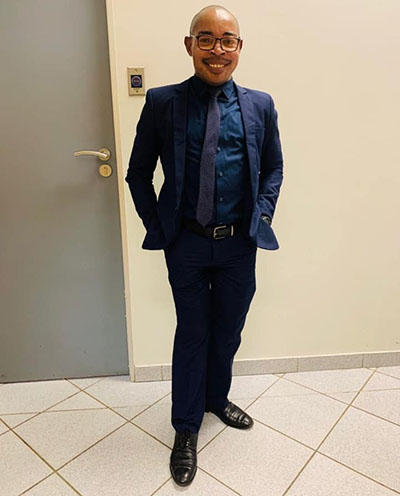 Josef Kefas Sheehama (44) has called a rickety shack made from scraps of tin sheets and planks in Rehoboth’s Block E location his home for many years. Born in Engela village in the Ohangwena region in 1977, Sheehama moved to Rehoboth in 1987 to live with his mother.

When the sun is shining, it becomes unbearably hot. But when it rains, water pours through the gaps and turns the shack into a mud pool.

Sheehama’s house was one of the hundreds of homes in Blikkiesdorp, an extremely impoverished area situated in Block E on the outskirts of Rehoboth.

For his family, poverty was like a steady, annoying tap on the shoulder, constantly reminding them of what they lack.

“I have had a very tough childhood. My mother used to sell vetkoek to provide for the family,” he said as he narrates his childhood and what it was like growing up with the bare minimum. Just like many slums across many towns in the country, Blikkiesdorp was riddled with crime, violence and drugs but underpinned by the everyday families whose tales of survival, struggle, resilience and hardship exist on a far more overwhelming scale.

“If one can make it out of Blikkiesdorp, they can make it anywhere in the world. Some of us have risen out of it, but most have sunk,” he said.

Life changed forever Sheehama’s struggles did not only end with living in an impoverished home. When he was 12-year-old, he was also involved in a car accident that left him physically challenged.

“I don’t remember how the accident happened, but I was in the intensive care unit for six months. I was bedridden for a year in Rehoboth’s St Mary’s Hospital before I was discharged,” he narrated.

His list of injuries was long and complex, causing one of his legs to fracture. His one leg is much shorter than the other, and he therefore walks with difficulty.

While healing, Sheehama was out of school for five years and had to sacrifice many extracurricular activities that had meant so much to him.

“I could not play in the streets with my friends anymore, and since I used to walk to school every day, life became even harder because I cannot walk properly,” he said.

With years of extensive physical therapy, Sheehama was eventually able to get back to a semblance of a normal life, although he still lived with pain and limited physical abilities.

“What kept me going was the thought that I could start over and live a normal life,” shared Sheehama.

After matriculating at Rehoboth High School, Sheehama was admitted to the University of Namibia, where he studied towards a Bachelor of Law degree.

“I could do most of the work, but I was also reliant on the help of my peers to work on campus because it was challenging walking up the stairs on campus or driving,” he added.

Despite it all, Sheehama was still determined to one day take his family out of poverty.

Disability not an obstacle While the services available to people with disabilities were less extensive than they are today, Sheehama made sure he persevered, regardless.

Although he has experienced many barriers, he said his life is not defined by his disability. He lives life just like anyone else without a disability would live their life.

“There’s lots I can do, and there are some things that I can’t do, for example driving, and I don’t expect the world to revolve around us,” he noted.

“I might be physically disabled, but my mind is not disabled. I studied my way up to where I am happy, and I was eventually able to change the situation at home,” he said.

Sheehama is currently a force to be reckoned with in the financial sector, as he works as a senior credit officer in one of the local banks.

His qualifications include a Master’s in Business Administration, Bachelor of Law, Bachelor of Commerce, postgraduate diploma in Islamic Banking and Finance, while he is also a certified associate professional banker.

He is now pursuing his PhD in Business Administration, and contributes regular opinion pieces to New Era.

“I overcame my struggles because I believed in myself. I never felt pity for myself despite my struggles, and that is the advice I want to give to everyone who is currently going through what I have gone through,” he encouraged his fellow citizens.

“I am not only saying this because I have endured hardships. I am talking as somebody who wore his skin down on his fingers trying to climb the ladder of success.”

He says if he could give young people with disabilities one piece of advice, it would be that “disability is not inability; just get out there and do what you have to do to succeed in life.”

Although Sheehama is now excelling and experiencing tremendous success in his current role, his dream is to one day become a chief executive officer for a bank. “I know I will become that one day soon,” he enthused.