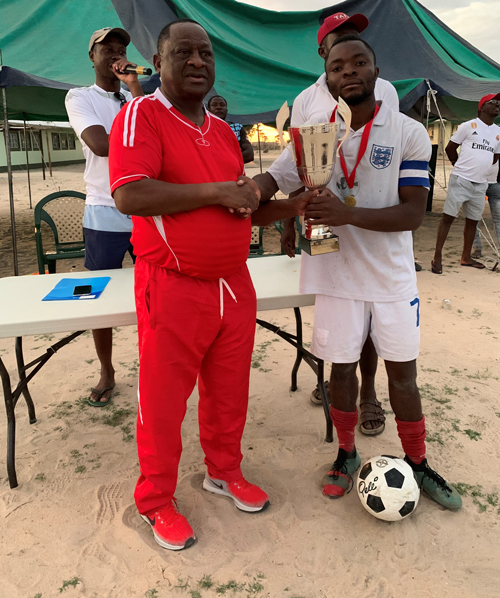 Being a doctor was never something he imagined when growing up – and nothing else was of interest to him besides sports. It was his bread throughout and there was no sport he couldn’t do – from volleyball to football – even to date, football is his passion.
Dr Kalumbi Shangula was born at Etilyasa in Omusati region; he is the third born out of ten siblings and always got preoccupied with sports.

“When you see me watching TV, it’s either soccer or some type of sport or news – but mostly sports.
Boxing, tennis, and rugby – I alternate between those channels. I mostly watch Manchester United – that’s my team, and Barcelona in Spain, as well as Bayern Munich in Germany – those are the types of teams I like to follow – but generally, I would watch anything as long as it is football.

Why medicine?
Dr Shangula grew up looking after his father’s livestock and joining the medical fraternity was never his dream. “My Mathematics teacher suggested I study medicine. It was not something I thought of; I was just going from one class to another aimlessly because there were not so many options – either you become a teacher or pastor. None of these appealed to me, so I was just going according to the flow, but the biggest influence was my Mathematics teacher,” mentioned Dr Shangula.

At that time, he was not well motivated to pursue medicine because he never saw black doctors, but the idea stuck to his head so he took note of the advice – that’s how he became a doctor.

Qualifications galore
Dr Shangula obtained his medical degree in Moscow, and another degree in Public Health from Harvard University. He holds a Master of Medicine, concentrating on public health and infectious diseases from the University of London, a Master’s in Business Administration, as well as several management certificates.

Family morals and values
Dr Shangula married late State Pathologist Dr Elizabeth Hinananye-Shangula in the early 1980s, they were together until she passed away in 2008. Together, they have three children: two boys and a girl.

“My late wife was a medical doctor too and I think our babies saw the difficulties from both of us when they had to be woken up at night when we had to attend to patients, and I am sure that influenced them not to follow our footsteps.”
He had a conversation with his wife and they decided to allow the children to make their own choices.
“We did this so they cannot blame us for anything related to their careers; they had and have the freedom to choose what they want; they are into economics and business – and at least there is one who has something in common with me when it comes to business and studied that course,” he burst into laughter.

Doctor in the kitchen
“I like to eat all types of traditional food; that’s my best cuisine – all types. Otherwise, I am a huge fan of freshwater fish; that’s what I like – and if I go to Katima Mulilo, for example during the bream season, my diet will consist of that for as long as it is available: bream, tilapia and also other types of seafood.”

“When I was a student back in my days, I would cook and eat at the same time. I would honestly eat whatever food is ready while I am cooking – and by the time I am done cooking, the pots are empty and ready to be washed.”
He added: “When I got married, I knew the kitchen was a no-go area, and I never interfered in those types of home affairs, so I had that respect and I stopped cooking – and up to now, I don’t cook because we have someone who does the cooking”.
Dr Shangula loves Oshikundu (a traditional Namibian drink made from fermented millet).

“We used to make Oshikundu at home – but sometimes, it gets difficult, as we run out of supplies or ingredients – unless you scout here and there to make the drink – that is my favourite; homemade is best. I love juice and if there are occasions, I indulge in alcohol; if there is a birthday or a wedding, I will take a tot (shot) or a glass of wine but not beer.”

home sweet home
After a long day at the office, there is nothing as pleasant as him coming to his family and catching up.
“I want to see people at home and the two dogs – Lumen and Daniella. I enquire on a lot of things from people at home and also chat about random stuff. We then see what’s for dinner, what’s missing in the house that needs to be bought and then switch to my sports and news – and later in the evening, have dinner until we go to bed. I sleep early and wake up around 05:00 – something which has been happening since my children were small, as I would wake them up, prepare them for school and so forth.”

Life lessons from exile
“I went through a big university – and that’s life. Life in itself is a big university. In exile, I went through a lot of difficulties – and they taught me to be resilient. I developed defensive mechanisms and also the ability to not let any situation be on top of me.”
He added: “I always advise people to never allow situations to overpower them. Always be in control of every situation; otherwise, it will overpower you. Those are survival strategies which you need to cultivate to survive.”
It was in exile that Dr Shangula went through tough military training in the then Soviet Union and that also brought inner strength.
“That made me realise I can cope. The coping mechanism got developed and whatever difficulties are there, you must know how to overcome them.”

One thing that many may not know about Dr Shangula is he never gets annoyed.
“I don’t get irritated. Anything or whatever provocation – I just don’t get annoyed at all. And when confrontation is about to happen, I walk away because once you get angry or irritated, you might make some decisions which you may regret later. That is my characteristic.”
He said: “The children know me very well; I don’t even quarrel – and if they have done something I am not happy with, we sit down and talk about it.”
– psiririka@nepc.com.na