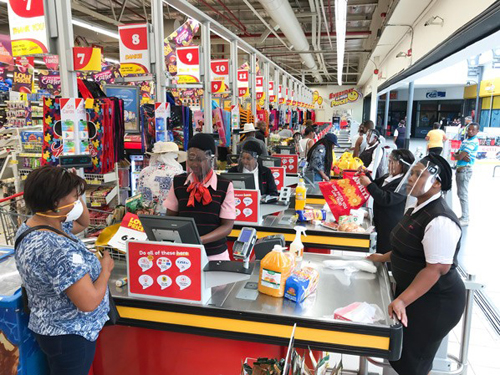 It is business as usual at retail stores owned by Shoprite Namibia after the company defied Friday’s labour court ruling, which interdicts it against hiring seasonal staff or ‘fixed term’ employees while full-time workers are on strike over better pay.

On Friday, Judge Shafimana Ueitele ruled in favour of the striking workers, interdicting Shoprite not to hire so-called seasonal staff or ‘fixed-term’ employees for the purpose of performing, in whole or in part, the work of employees who embarked on a strike in December last year.
Ueitele further interdicted Shoprite not to require, permit or allow any of its employees, including managerial and or trainee manager employees to do the work of an employee who embarked on strike action.

However, when New Era visited Shoprite, Checkers and Usave this week, the stores are fully operational, making use of so-called seasonal staff or ‘fixed term’ employees.
Last year, Shoprite employed 390 ‘fixed term’ workers as replacement for those on strike.
On 23 December last year, a total of 2 042 workers went on strike after they could not reach an agreement for better pay and benefits with their employer.

Speaking under anonymity, a shop steward at Shoprite, situated on Independence Avenue, Windhoek, informed New Era they observed ‘fixed term’ employees performing duties of workers who are currently on strike.
“We enquired with the store manager; she informed us she is aware of the staff carrying out our duties, but she does not have directives to let them go. She also informed us that they have plans on appealing the court’s decision,” noted the shop steward.
The shop steward added they have compiled a report of their findings, which has been submitted to the union representing their interests.
Efforts to get comment from the Shoprite management proved futile since Monday.

The workers are now demanding for the closure of the stores if ‘fixed term’ employees are allowed to continue performing duties on their behalf during their engagement in a lawful strike.
“We have contacted the police to come to our aid, but nothing has happened. We were informed the police cannot intervene without directives from police chief Inspector General Sebastian Ndeitunga,” explained a shop steward at Shoprite, Katutura, who too opted to speak on condition of anonymity for fear of reprisal.

According to Khomas regional police commander Commissioner Joseph Shikongo, there is currently no court order directing the police to intervene or ensure that Shoprite abides by the interdict.
“The legal instruments require the applicant to enforce the court order. So, in this case, the workers have to go back to court and get a court order that would direct the police to intervene,” explained Shikongo.
The court order that was issued on Friday clearly gives the union the power to go and inspect, and ensure that Shoprite abides by the court interdict, said Shikongo.

Labour commissioner Henry Kassen declined to comment on the matter.
“All I can say is the process of reconciliation is currently ongoing. So, it would not be appropriate for me to comment at this stage. I will be in the position to say something once the matter has been finalised,” explained Kassen.
Labour expert Larry Akuupa said if Shoprite is making use of ‘fixed term’ employees, they are not only violating the strike rules but the recent court interdict.

He said it is up to the representing union to take up the matter with the court so the violating party can be brought to task, as it is not the first time Shoprite is in the media, accused of violating the country’s labour laws.
“However, it is important that the workers refrain from any illegal act, particularly in light of the recent interdict, which works in their favour and they are represented by a union which speaks for them,” noted Akuupa.

Yesterday, pressure group Affirmative Repositioning (AR) movement announced they will be joining and reinforcing the efforts of the Namibia Food and Allied Workers Union (Nafau) to address the plight of the striking workers.
“We send a clarion call to our activist countrywide to shut down all stores forming part of the Shoprite group of companies,” reads the statement.
Efforts to get a comment on the way forward from Nafau’s general secretary Jacob Penda proved futile, as his phone went unanswered.  - mamakali@nepc.com.na