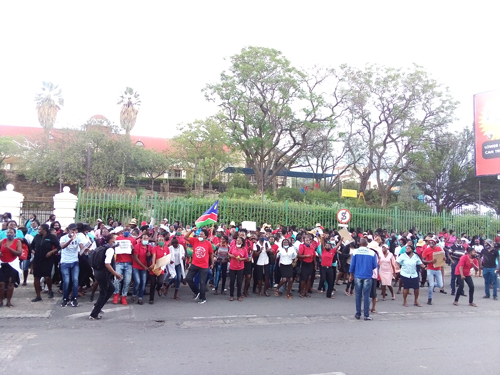 After the failure to reach an agreement with their employer for better wages for the second time on Thursday, the Shoprite striking workers are now preparing to head back to the labour court.

Lawyers for their union, the Namibia Food and Allied Workers Union (Nafau) are in the process of compiling a case of contempt of court against Shoprite Namibia for failure to comply with the court order, according to Nafau secretary general Jacob Penda.
“We are going back to court to get a contempt of court order that will compel Shoprite to abide by the law. Because what they are currently doing is contravening the laws of this country,” Penda said.

On 8 January 2021, the labour court in Windhoek interdicted Shoprite not to hire so-called seasonal staff or “fixed-term” employees to perform, in whole or in part, the work of the employees who embarked on a strike as from 23 December 2020 onwards for the duration of the strike.

Judge Shafima Ueitele further interdicted Shoprite not to require, permit or allow any of its employees, including managerial and or trainee manager employees to do the work of an employee who embarked on strike as from 23 December 2020 onwards for the duration of the strike.
The two parties went back to the negotiating table on Thursday, but the meeting did not bear any desired fruits.

“The two parties did not agree. Shoprite took a stand on its position that they will only offer the workers an increment between 5% and 10% without any added benefits. Shoprite further attached certain conditions that we could not entertain,” explained Penda.
Penda further indicated that Shoprite’s offer to the workers expired on Friday at 12h00. Despite the hurdle, the union said the strike action over better pay will continue.

On 23 December last year, a total of 2 042 workers went on strike after they could not reach an agreement for better pay and benefits with their employer.

The workers have been demanding a salary increment of N$600, a housing allowance of N$450, a transport allowance of N$500, and permanent employment for workers who have worked in the stores for over a year temporarily.
Documents filed before the court show that most of the employees are employed temporarily for extended periods ranging up to more than 10 years.

They also do not receive any benefits such as housing allowance or medical aid.
On Friday, upon receiving the outcome of the negotiations, the workers started accusing the union of not working in their best interests.
They vowed to take matters into their own hands and close all Shoprite outlets. The workers called on the public and Affirmative Repositioning (AR) movement assistance in closing the stores.

A scuffle broke out between the protesters and the police and left one person hospitalised, four shot in the heads and more than 10 others injured at Oshakati on Friday.

This came after the police Special Reserved Force fired rubber bullets to disperse the crowd at Shoprite in Yetu Shopping Centre. The police said it was forced to fire on the “unruly and uncooperative” crowd, which was disputed by Nafau.
Nafau’s northern regional coordinator Festus Indongo has accused the police of firing live bullets on the protesters, claiming that they have collected metal-like bullets from the scene.

In a statement, police spokesperson deputy commissioner Kauna Shikwambi accused the striking employees of stoning the police.
Shikwambi said an officer got injured after being hit with a stone on the right thigh and a case  - CR 170/01/2021  - of assault with intent to do grievous bodily harm has been opened at Oshakati.

The union has disputed the police version that the striking employees threw stones at the police.
“There is no truth to that, no police was beaten. Where did the employees get the stones from?  The area where the incident happened is interlocked and so is the area opposite the road. Where did the stones came from?” questioned Indongo.
In Windhoek, the striking workers from different branches in the city including Checkers tried to forcefully close the Katutura Shoprite, but were foiled by the police.

Meanwhile, the Ministry of Labour, Industrial Relations and Employment Creation said it has been engaging Shoprite-Checkers and Nafau regarding the ongoing wage negotiations.
However, the ministry has urged the parties to “restrain themselves and refrain from illegal conduct and to abide themselves to the laws of this country including court orders.”
– mamakali@nepc.com.na