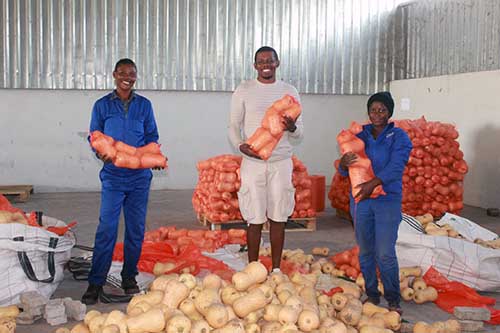 SIKONDO – The Sikondo irrigation project is on track with agricultural activities despite numerous economic challenges, including ageing infrastructure and high electricity costs.

The 35 staff members on the farm, situated in Kavango West and some 10km west of Rundu, are harvesting tomatoes, butternuts and green peppers.

The project is also planning to plant a further two hectares of vegetables under their net, including tomatoes and green peppers, while also looking into cucumbers for their Windhoek market.

“We have planted about 106.6 hectares of white maize, usually used for milling maize meal,” said the farm’s acting manager Maxwell Nghidinwa, who added that they have strategies to survive the current harsh economic situation and those at the farm.

Nghidinwa holds a Master’s degree in International Horticulture, which he acquired from the Leibniz University in Hannover, Germany.

“The challenges are expected, looking at the state of the economy, and it’s not only the agricultural sector that is suffering. From the Green Scheme’s perspective, the government has been supporting us with several grants. However, the challenges in general haven’t changed,” he added.

Nghidinwa told New Era that some of their biggest challenges are the high electricity costs and the old implements they use. Tractors are constantly breaking down.

“With the current economic situation, it aggravates the situation at the farm and makes it harder to farm, and to run the farm cost-effectively,” he noted.

“Right now, what we are doing is focusing more on how to make the farm efficient internally, and this is basically a decision that we took as the management of Sikondo. We want the administration to be efficient; we have improved the internet so that when we are doing procurement, it’s not a hassle.”

The farm has likewise been addressing some of its challenges.

“We ensure that consumables are procured in large quantities so that when there are breakdowns, there are no delays to affect production. That is the remedy for the situation, but then there are other factors that are outside our control, which require financing and capital,” he explained.

The spare parts of tractors procured from Argentina are also hard to find in the local market.

“Currently, we are harvesting potatoes, green peppers and butternuts. We will continue to harvest them to supply the market,” he enthused.