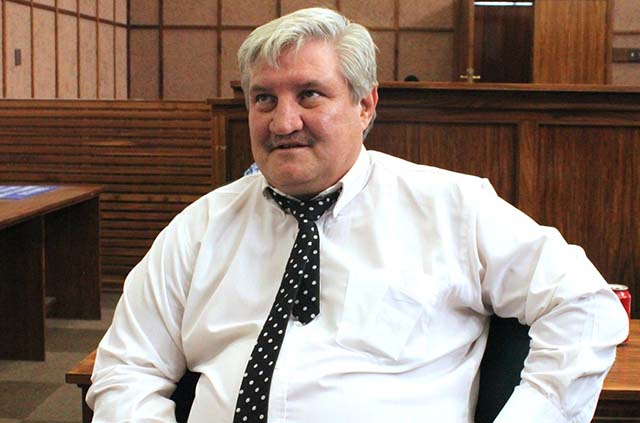 A South African national who was convicted on multiple charges of fraud but had filed a N$5 million lawsuit against the State for alleged malicious and wrongful prosecution, was deported to his homeland.

In papers filed in the High Court, the Prosecutor General (PG) indicates that Adriaan Jacobus Pienaar (60) was deported after having served his 10-year sentence. The PG furthermore states that the Immigration Tribunal intends to list Pienaar as an illegal immigrant, which means the immigration and border control authorities will refuse him any right to enter Namibia.

Having heard and read the documents filed by lawyer Ndiriraro Kauari, judge Nate Ndauendapo dismissed the multi-million-dollar lawsuit against the State and deemed the case finalised, removing it from the court’s roll.

Pienaar was convicted in 2019 on various charges of fraud. This was after the court proved he had committed fraud from May to November 2009 when he used forged orders for goods to make purchases on credit at businesses in Windhoek. In the process, he bought cigarettes valued at close to N$202 000, tools valued at almost N$124 000, a television set costing N$21 600, tyres and rims that cost N$16 000, and meat products worth about N$9 500 without paying for any of the goods.

The Regional Court sentenced him to six years imprisonment, of which three years were suspended for a period of five years. The court took cognisance that he had been in custody for more than six years before his trial was concluded.

Prior to that conviction, Pienaar was serving a two-year sentence on similar charges. Once more, he had bought goods on credit at various businesses, based on false promises that he would pay later for the goods.

In the process, he defrauded businesses at Keetmanshoop, Karasburg, Lüderitz, Grootfontein and Swakopmund of hundreds of thousands of Namibia dollars.

In his suit, Pienaar claimed that he was unlawfully arrested in 2013, while already behind bars, on charges related to his immigration status.

He further claimed that the prosecution’s malicious action prevented him from getting bail in other cases he was facing, consequently resulting in him being deprived of his liberty.

Pienaar alleged that he was held in custody for three-and-a-half years without reasonable cause.

In their response to Pienaar’s allegation, the State indicated that he was not arrested but merely charged with the offences – which were added to those of fraud on which he was subsequently convicted.

The State denied the charges against Pienaar were malicious or deprived him of his freedom since he was already a trial-awaiting inmate, facing more than 40 counts of fraud.

The State stressed that despite Pienaar having been warned not to return to Namibia as he was deemed a prohibited immigrant, he returned and conducted business without the necessary work permit.