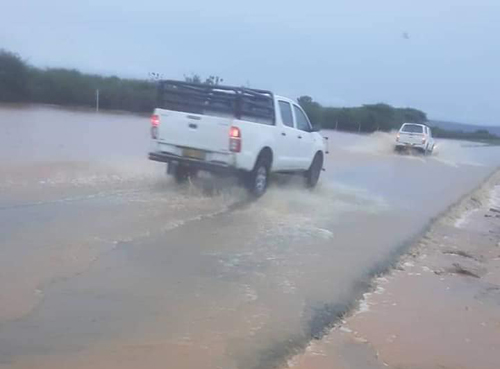 A number of roads in southern Namibia suffered heavy damage following good rain received over the last couple of days. The Roads Authority yesterday cautioned the public on the recently damaged roads in the southern part of the country.  It appealed to motorists to exercise extra caution and be vigilant when using public roads, as there could be road damages, which the company is not aware of yet. “Our maintenance team is working around the clock to inspect and assess the conditions of the roads and ensure that warning signs are erected. Hence, all road users are again reminded to comply with the installed warning signs for their safety,” reads the statement from the RA.  Currently, the known affected roads in the south are the B1 route, Trunk Road (TR) 1/2, from Grünau to Keetmanshoop TR 1/2 at kilometre (km) 121 near Guruchab River Bridge where the eastern road shoulder has been extensively damaged. The RA stated that the road is open to traffic and road signs have been erected to warn the road users about the damaged section.

“The road is narrow, kindly exercise extreme caution.”
Main Road (MR) 27 or tourist Route C16, from Keetmanshoop to Aroab MR 27 has also been damaged at several places with the southern lane washed away at some spots, the road is currently only accessible by 4x4 vehicles.

The RA advised small vehicles owners to avoid travelling on this road until further notice. Furthermore, the other affected roads in the south are MR 22 and district road 271 (D271), gravel roads from Noordoewer to Karasburg MR 22 and D271 are both temporarily closed to traffic due to serious wash aways at river crossings and a collapsed culvert on MR 22.

“Roads users from Noordoewer to Karasburg are urged to use the tarred road via Grünau.” Also, the Hom River Bridge in Warmbad on District Road 210 is temporarily closed to traffic due to the damage to the bridge near Warmbad.