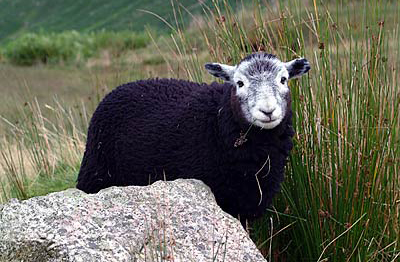 The Herdwick is a breed of domestic sheep native to the Lake District in North West England. The name “Herdwick” is derived from the Old Norse herdvyck, meaning sheep pasture.

Though low in lambing capacity and perceived wool quality when compared to more common commercial breeds, Herdwicks are prized for their robust health, their ability to live solely on forage, and their tendency to be territorial and not to stray over the difficult upland terrain of the Lake District.

It is considered that up to 99% of all Herdwick sheep are commercially farmed in the central and western Lake District.
The wool of a Herdwick has unique qualities relating to durability. Thick bristle type fibres will often protrude from garments made from the wool, forming a protective layer in blizzards - most likely the same qualities that protect the sheep in similar conditions. Herdwicks have been known to survive under a blanket of snow for three days while eating their own wool.

Severely threatened by the 2001 outbreak of foot-and-mouth disease in England and Wales, the breed has survived due to the intent to preserve this unique animal as a crucial part of traditional Lakeland agriculture.
Still far fewer in number than most commercial breeds, Herdwicks survive largely due to farming subsidies.
Herdwicks are a dual-purpose breed, producing strongly flavoured lamb and mutton and a course, grey wool. The slowly maturing breed is one of the hardiest of all the British hill sheep breeds, withstanding the cold and relentless rain of the Lake District at heights upwards of 3 000 feet (about 1 000 metres).

Herdwick lambs are born black and, after a year, they lighten to a dark brown colour (the sheep are called hoggs or hoggets at this stage). After the first shearing, their fleece lightens further to grey. Rams are horned and ewes polled.
For shows and auctions, Herdwicks traditionally have their wool ruddied up (the local term for raddled) with dye. Rams are also ruddier when put out with the ewes to show which have been mated and the dye is also one method (called a smit) of marking sheep for ownership.
Before chemical dyes became available, this dye was made from either iron ore or graphite mixed with grease. For many years the legal method of identifying a particular shepherd’s sheep were notches cut out of a sheep’s ear, called lug marks - now replaced by ear tags.