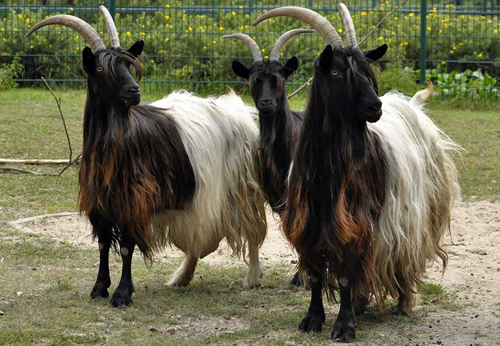 The Valais Blackneck is a breed of domestic goat from the canton of Valais, in southern Switzerland, and neighbouring areas of northern Italy.
The largest concentration is in the area of Visp (Viège). It is present in modest numbers in Austria and Germany.

It is known by many names, including German: Walliser Schwarzhalsziege or Gletschergeiss; French: Col Noir du Valais, Chèvre des Glaciers or Race de Viège; and Italian: Vallesana or Vallese.

The Valais Blackneck has a distinctive colouring, black from the nose to behind the shoulder and white from there to the tail.
A meat and dairy breed found in southwestern Switzerland, the Valais Blackneck has black forequarters and white hindquarters and long hair.
There is also an Italian strain, called “Vallesana”, with the line of separation between black and white parts situated more cranially than the Swiss strain, that is just behind the olecranus. The Italian strain is actually very reduced in number.

The English Bagot goat is similarly coloured, and has been thought to derive from this breed by descent from one presented to Richard II of England in 1387. DNA studies have shown that the Bagot originated in Spain.

Within Italy, the Vallesana is raised in the provinces of Verbania and Vercelli. It is one of the forty-three autochthonous Italian goat breeds of limited distribution for which a herdbook is kept by the Associazione Nazionale della Pastorizia, the Italian national association of sheep- and goat-breeders.