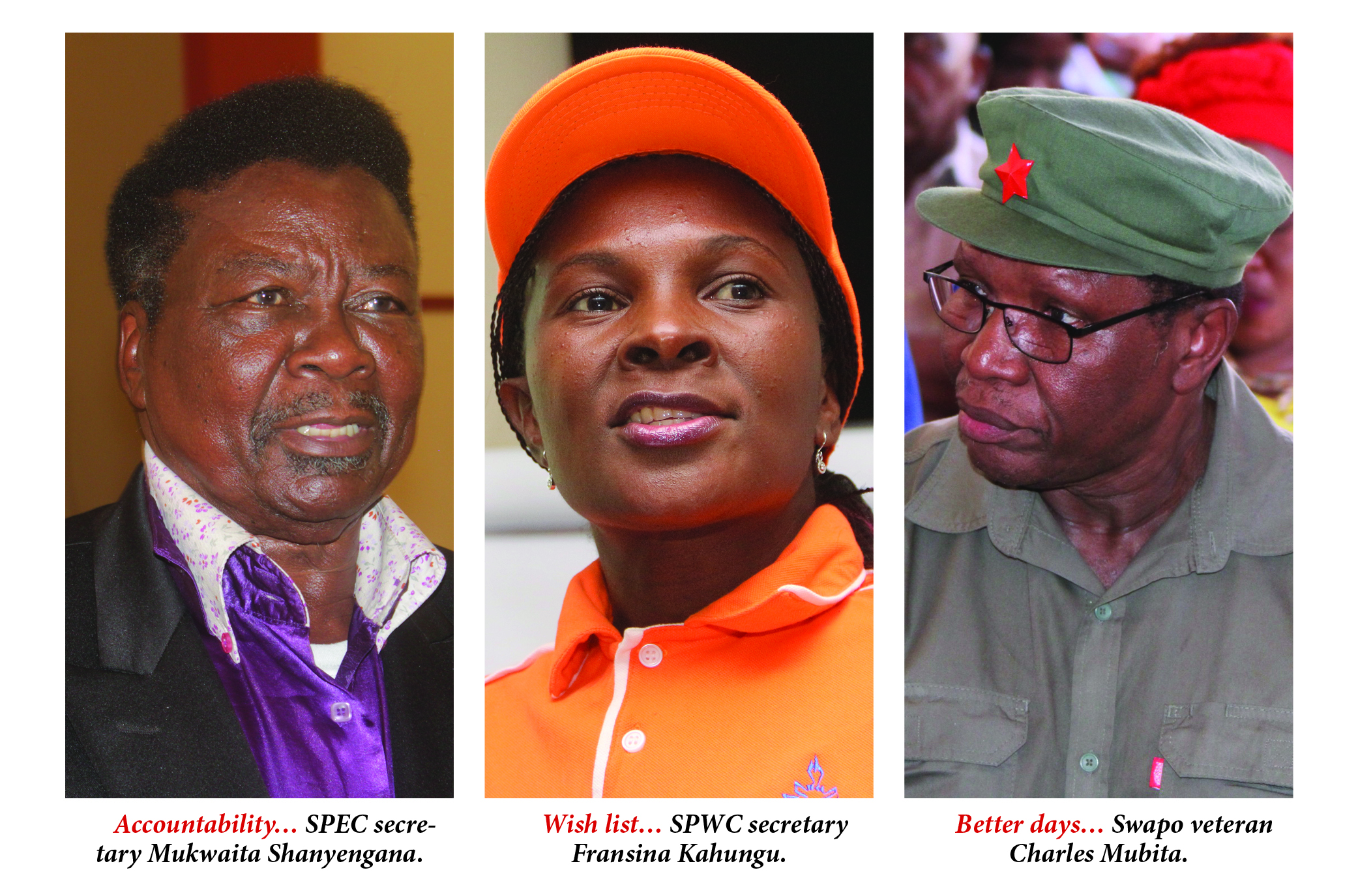 As Swapo edges closer to its seventh ordinary congress, its wings have highlighted key issues the former liberation movement should pay attention to, including electing leaders on merit, rather than blind loyalty.

The Congress must also look at the current state of the party to address structural issues, including a general mismatch between those leading it and the realities facing ordinary Namibians. While the eyes of many are fixated on the three candidates vying for the coveted vice presidency, some Swapo wings opined it is the qualities of those elected to the central committee (CC) – the highest decision-making body between congresses – that will make or break the movement. In an interview yesterday, Swapo Party Women’s Council (SPWC) secretary Fransina Kuhungu said bread and butter
issues should take centre stage at congress.

Swapo must also look itself in the mirror to see whether or not it has veered off the track.

“I would like the congress delegates to deliberate on how the Swapo party is carrying out its activities. I expect delegates to deliberate with the understanding of the report of the central committee to the seventh ordinary congress. I would also like the congress to craft the way forward on how Swapo party activities can be carried out,” the former Windhoek mayor continued.

She went on to say quality must prevail over popularity at the upcoming assembly.

“Congress is expected to elect leaders who presented projects or ideas to improve the lives of all Namibians. I would like congress delegates to look at the capacity of people to be voted into the central committee,” she said.

It is Kahungu’s view that a weak Swapo CC is a threat to the party’s upward mobility.

“It does not help for you to have well-crafted congress resolutions but then you don’t have capable cadres who can implement the resolutions,” she said.

“Generally, the congress must discuss resolutions from the other congress and the implementation by the government as well as the progress of the country in general,” Shanyengana said.

Meanwhile, he said, Swapo must also hold the government it leads accountable.

“This is a Swapo party-led government. They have to report what they’ve done. The government has to implement where the party wants to direct the country,” the Swapo veteran advanced.

This, he said, is the only way the ruling party can reclaim its glory on the elections front in 2024.

He also wants issues concerning the economy, including the ownership of the country’s abundant natural resources, to enjoy special attention.

“As the Former Plan Combatant Association, we expect issues concerning the economy to be addressed so that every Namibian benefit from the resources of this country,” Mubita said.

The delivery of quality services to Namibians cannot be overemphasised, Mubita continued.  “We also need to upskill Namibians with technological skills to ensure that we are able to process our own resources… we should not treat our resources as if they are not ours. They are ours, and we cannot sell them to anybody,” he said.  This weekend’s congress will be FPCA’s maiden appearance.

The FPCA was conceived at its founding conference in Ongwediva on August 2022 when its constitution was also adopted.

Its existence was necessitated by the need for ex-Plan militias to unite to promote the welfare of all former combatants and their families.  The association also aims to develop mass mobilisation and campaign for Namibians to rally behind Swapo.

It also wants to “defend the independence of Namibia for which the blood of thousands of Namibian martyrs was shed”.

On Thursday, under 800 delegates will convene in Windhoek to elect a new Swapo leadership for the next five years, with a sharp focus on who will emerge as vice president and automatically Swapo’s candidate for the 2024 presidential elections.

Parliamentarian Lucia Witbooi, who was also vying for the deputy secretary general position, withdrew from the race yesterday, labelling it as “too crowded”.

For the better part of the last two months, the candidates addressed delegates, side-by-side, why they believe they are best suited for the roles they are eyeing.

Meanwhile, Swapo leader President Hage Geingob has again showered the just-ended internal campaign with praises, saying everything went as planned, something that put critics and naysayers into a state of permanent shame.

According to Geingob, Swapo’s adversaries were hoping the campaigns, which saw competing candidates share the podiums as they canvassed for support in the 14 regions, would be dominated by mud-slugging.

“I saw them praying that we fight… this is an internal process. [A] beautiful one, sophisticated and we shamed you… no fighting. They were praying. Oh my God, when do we hear [that] they were pushing each other,” Geingob said, likening the campaign process to a job interview.

Geingob made these remarks during the opening of the central committee meeting before it is dissolved at this week’s congress, where all positions become vacant and up for grabs.

The meeting deliberated on burning issues ahead of the showdown.