Home / Tate Mike has no ‘intention of absconding’

Tate Mike has no ‘intention of absconding’ 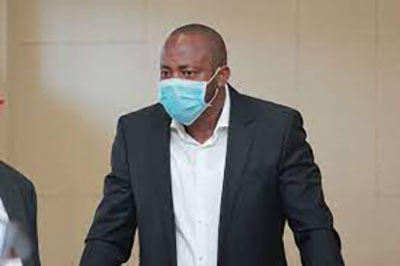 Fishrot accused and former Fishcor CEO Mike Nghipunya (37) yesterday told Windhoek High Court Judge Shafimana Ueitele he has no reason to run away, as he has done nothing wrong.

Nghipunya, popularly known as ‘Tate Mike’, made these statements when he testified on his behalf in a bail application lodged by him and five of his co-accused.

Judge Ueitele previously shot down an application by lawyer Lucious Murorua on behalf of former justice minister Sacky Shanghala, former Fishcor board chairperson James Hatuikulipi and Pius Mwatelulo to have the matter stand down until Thursday for them to file affidavits and for their South African advocate Vas Soni SC to take the reins.

He told the judge they were “semi-ready” and only has a few issues to sort out. The State, represented by Cliff Lutibezi and Ed Marondedze, told the judge they are opposed to the application in principle, but as it was lodged only late the night before, they did not have a chance to study it and file a notice of opposition.

After breaking for 10 minutes to consider the application, Judge Uietele returned with a ruling that it is not necessary for Shanghala to be first in line, but that bail applications are individual in nature and the sequence is not important.

As such, the judge ordered, Nghipunya’s application can be heard first, followed by that of Shuudifonya and Mwapopi, which would give Murorua and his team plenty of time to file their affidavits.

He further ordered them to file by no later than today at 16h00.

Nghipunya then took the stand and told the judge he was in Tokyo, Japan, when news of the Fishrot scandal first broke in November 2019, and he returned to Namibia despite murmurings about his involvement and his possible arrest.

He further said that during November and December, before he was suspended, he visited South Africa, in particular Cape Town and Johannesburg, on various occasions, and always returned to Namibia, as he has no reason to “run away”.

He further said he has 17 living siblings and has no family or relations outside Namibia – and he is single with no children.

He further said that on various occasions during December 2019 and January 2020, he was in contact with the Anti-Corruption Commission (ACC) and fully co-operated with them – and could have easily absconded, knowing well that his arrest was a real possibility – but as he had nothing to fear, he stayed and even went to hand himself over to the ACC.

According to him, he was told already on the Friday before his arrest that the ACC was looking for him to arrest him, and he did not try to abscond.

Phatela said all of the obstacles put by the State to hinder his client’s release on bail were put to rest.

According to him, the investigation is finalised, which rules out interference and abscondment cannot be relied upon, as Nghipunya had ample opportunities before his arrest to flee, as he was so inclined.

He further said the grounds of public interest and administration of justice do not hold water, as the soul and spirit of the Namibian society is not in newspaper headlines, but in the Constitution, which guarantees a speedy and fair trial.

This equally relates to the interest of justice, he stated, and added that Nghipunya must be given a chance to resuscitate the remnants of his life – then presumption of innocence remains the cornerstone of our judicial system – and the accused must be given an opportunity to prepare for his trial in a dignified and proper manner.

According to him, this cannot happen while Nghipunya is incarcerated, as the docket is more than 80 000 pages; consulting there is a nightmare and not feasible.