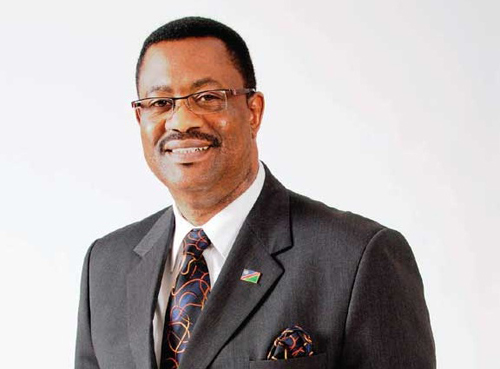 He is an extraordinary man of substance, known in social circles as an astute academic, legal guru, veteran politician, farmer, businessman, and incumbent Commander-in-Chief of the steadfast Ovaherero Traditional Authority (OTA).This gentleman is none other than Advocate Vekuii Rukoro, famously known as “Rocky” back in the day amongst fellow students from the unofficial “School of Excellence”, the revered St Joseph’s Secondary School (Döbra), a godly gifted bloke spoilt with multiple talents.

It was indeed at Döbra where the soft-spoken calculated huge frame student rose to prominence, not only academically in the classrooms, but also on the sports field, as well as in road running and inside the boxing ring.

Founder member of the Döbra school’s boxing academy, “Rocky” doubled as an old-fashioned center forward in the mould of Wimbledon’s John Fashanu. He was a valuable squad member of the star-studded school hostel football team Eusebio Eleven. He also chased the oval ball with the school’s rugby fifteen and was a mean long distance ace too.

In today’s edition of your favourite weekly sports feature Tales of the Legends, profiling Namibian athletes alive and posthumous, New Era Sport goes toe to toe, blow by blow and shoulder to shoulder with the Paramount Chief of the Ovaherero community, Advocate Vekuii Rukoro.

History reveals that the now resurrected Jaguars Rugby Club was and still remains the only rugby club from Namibia’s largest residential area Katutura, The club, which came into existence in the early 70’s, was the brainchild of former students from both Augustineum High and St Joseph’s Secondary Schools (Döbra).

A significant chunk of the team’s playing personnel were young vibrant political activists-cum-oval ball chasers, who adventurously pedalled the game of rugby to advance their political agenda.
It should be noted that back in the day, the game of rugby was taboo in the impoverished marginalized Bantu communities whilst the whites were comfortably going about their business unhindered across town within the confines of their posh residential establishments.
Despite the lack of genuine interest and conspicuous absence of competitive rugby playing teams nephewed by inadequate recreational facilities in black townships, the trident of secondary schools in the vastly populated central region, Augustineum, Ella du Plessis and Döbra managed against all odds to assemble formidable rugby teams. “Rocky” learned his trade in the tough and demanding rigours of the oval ball discipline at Döbra.

Strangely, for a strongly built bulky dude, one would have taken it for granted that “Rocky” would occupy the position of lock or flanker where men are usually separated from the boys. Nevertheless, he was slotted in the plum position of flyhalf, a vacancy normally reserved for slightly built mobile athletes in modern rugby. A jack of all trades, his vast pool of talents were not only restricted to the oval ball game alone, as “Rocky” would regularly feature for the school hostel football team Eusebio Eleven. Sadly, his flirtation with the oval ball rendered him ineligible for selection into the school’s football team as Döbra students were prohibited from representing the institution in more than one different ball game. In the meantime, ‘Rocky” teamed up with fellow students John Nauiseb-Kaperu, Joe Murangi, Laurentius Boetman “Vossie” van Wyk, George Mukuaahima and a few others to establish the Döbra Boxing Academy. He was also equally home on the athletics track, excelling in long-distance running. Upon completion of his studies, the Otjiwarongo-born lad found refuge in the city of bright lights (Windhoek) in search of better employment opportunities. He managed to carve himself into a slave position as an articled clerk at leading law practitioners Lorentz & Bone, holed up in the heart of Kaiser-Strasse and as they say, the rest is history. In 1972 to be precise, the militant “Rocky”, alongside fellow enthusiastic scholastic rugby players put shoulder to the wheel to form the first ever truly recognized rugby team from Katutura. The team was befittingly baptized Jaguars Rugby Club. The new kid on the block attracted the following players: Packy Uaaka, Frank Murangi, Engelhard Kaitjindi, Immanuel Ngatjizeko, Gerson Katjimune, Michael “Ou Pine” Pienaar Sr, Koos Kauta, Gert Willemse (+d), Agrippa Kapapu, Chris Muukua, Victor Hamburumana Kangootui (+d), Hendrik Christian, Abisai “Shabby” Rukero, Germanus Mate, Job Tjiho, Andronicius Kavikairirua, Bruno Swarts (+d), Festus Karupa (+d) and many others.  Departed popular radio sports anchor Alpheus Kuiri Kaomo Kahorongo was roped in as team manager. May his precious soul continue to rest in peace.

Jaguars joined the Central Rugby League for non-Europeans, featuring teams from Windhoek, Rehoboth, Mariental, Lüderitz and Walvis Bay. However, it was not a smooth sailing journey for the newcomers as they were subjected to a hostile reception, ranging from all kinds of maltreatment such as derogative racial slurs and unfavourable refereeing decisions going against them at the slightest provocation.
“Our entrance into the league set-up was certainly not a bed of roses, our opponents used all tricks in the book of dirty tricks to unsettle our pattern of play but we somehow managed to weather the storm,” recalls Jaguars’ now retired inspirational skipper Elias Jeja.

“We were up against Coloured/Baster teams always playing in front of their habitually intoxicated unruly foul-mouthed fans, worsened by biased referees from their own community. I vividly recall one particular nasty incident in a league match against Swans in Khomasdal, when the referee awarded a highly disputed penalty kick within striking range against us. “Swans scored from the resultant delivery but to our amazement, the very same match official joyfully celebrated the three-pointer with the jubilant Swans players, adding salt to the wound, so pandemonium broke out as we angrily confronted the match official for his ungentlemanly antics.” In 1977, Jaguars were part of teams from the previously disadvantaged communities to be swallowed in the newly formed South West Africa Rugby Union (SWARU) during the half-hearted abolishment of apartheid laws under the watch of Advocate Louis Pienaar, which prohibited teams from the townships to rub shoulders with their more affluent white counterparts. The unavoidable introduction of multi-racial sport led to the birth of SWARU. However, Jaguars faced a fire of baptism, not only on the field of play but had to be content with constant racial prejudices from the kaki-clad Klipdrift-guzzling supporters of their mainstream opponents across the city.

“We were branded all sorts of unimaginable names, infamously labelled ‘The Jeffersons’ in sarcastic reference to the popular TV show The Jeffersons. The soapie featured African-American actors and was screened on the South West Africa Broadcasting Corporation (SWABC) television station. Regrettably, Jaguars folded when a significant chunk of the playing personnel went into exile to further their academic aspirations.”

Elsewhere in the industry of leather trading, “Rocky” proved to be a noted light welterweight boxer in the boxing ring. He will be best remembered for his astonishing knockout victory against Hijameja Rukira.
The hard-hitting “Rocky” stunned the fully packed Kuisebmond Community Hall in Walvis Bay, when he masterfully knocked the lights out of his bemused opponent via a vicious right hook that would have left American boxing icon, the late Cassius Clay (Mohammed Ali) green with envy.  The victory earned him admiration amongst the throngs of boxing enthusiasts. That particular bout proved to be the defining moment of his otherwise flawless but somewhat abbreviated unfulfilled boxing career.

Former fellow Döbra student Jeja describes “Rocky” as a phenomenal multi-talented athlete who could have easily climbed the ladder to stardom without having to shed an ounce of sweat, had he not devoted his full attention to politics.
“He was a damned entertaining venomous clever fighter with amazing footwork and packed a mean punch in his knuckles. Without a shadow of doubt, ‘Rocky’ was most probably the second best boxer from our stable just inches away from the pocket-sized Joe Murangi,” Jeja adds.