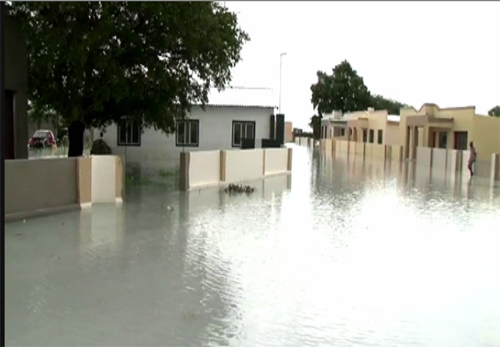 Local authorities in the Omusati region say they are better prepared this time around to deal with seasonal floods, widely known as efundja.
The efundja, which is often triggered by heavy rainfall in southern Angola, results in devastating flooding that causes damage to road infrastructure, property, the displacement of people from their homes – and at times, loss of income to businesses.

“We have a budget of N$200 000 that will be used now to construct a new water structure and maintain the existing stormwater infrastructure, whereas N$70 000 is put aside and budgeted for emergency and disaster management,” he said.

However, Namwandi explained, the town also has a storm management masterplan in place that is not yet implemented due to a lack of funds.
“As I have explained, we are ready. We have prepared our stormwater master plan that is completed but we did not implement it due to lack of funds. But as soon as we get funds, we will implement it – and with that, I can assure you, we will be safe. But, remember the natural disasters are difficult to control and manage,” he said.

He emphasised that a stormwater master plan would study and model the existing stormwater management system in detail, establish project goals, and prioritise projects.
The master plan will also look at possible ways to fund system upgrades, Namwandi said.
Oshikuku spokesperson John Siloiso said the local authority has established a Disaster Risk Management Committee, chaired by the mayor in 2019, which will be responsible for dealing with any disaster, including floods.

“To date, council has never relocated any flood victims. And we have sufficient highland within town boundaries on which to relocate any resident affected by the flood,” said Siloiso.

He also added the town has put aside N$30 000 disaster mitigation. At Outapi, local authority CEO Ananias Nashilongo explained that so far, the town has not received enough rain to warrant a comment on how they intend to deal with the seasonal and stormwater floods.
Northern-based hydrologist Leonard Hango said the country was still at the beginning of a rainy season; hence, local authorities that are prone to flooding need to be fully prepared for the eventuality.

“We are still at the early time of our rainy season. And not all parts of the country received rain. We still expect more water rain; hence, local authorities, including my town, Oshakati, needs to be alert and prepared,” Hango, who is also the Oshakati mayor, said.
Oshakati is one of the flood-prone areas in the north.

According to Hango, the town is working around the clock to construct new stormwater channels while rehabilitating the existing ones at various settlements at the town.
An embankment is also being constructed at Ehenye.
“An embankment is a hydrological model that will assist floodwater to flow out smoothly to floodplains and water catchment areas without causing flooding. With this new hydrological model, if we receive normal rainfall, we are likely not to experience any flooding in town this year and no resident will be affected in any way,” he stated.
- ljason@nepc.com.na