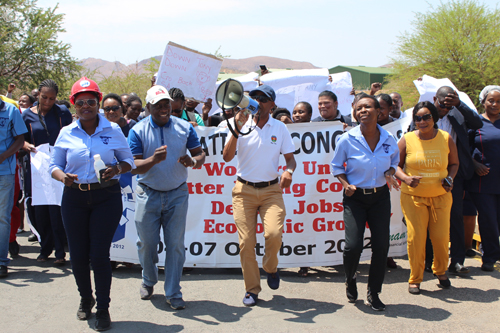 Labour movements have played an integral role before and after independence. However, political commentators are of the opinion local trade unions are finding it extremely difficult to remain relevant, and simultaneously commit against slave wages, retrenchments and poor working conditions.

The country’s biggest umbrella union, the National Union of Namibian Workers, is affiliated to the ruling Swapo. However, questions have been asked about its influence on the economy and other challenges facing workers.
Deep-seated political divisions have, according to commentators, neutralised the once-powerful labour movement, saying it was now being used as a springboard for political office by local union leaders.

Associate professor at the University of Namibia Nico Horn said local trade unions date back to the pre-independence era when they shared the values and ideals of the liberation struggle.
He explained after independence, Swapo and the trade unions worked closely together.

“However, many trade unions have complained in recent years that a too-close relationship with the government compromises their independence. Attempts to be more critical did not bring the results that younger unionists want,” said Horn.
Referring to plans by Affirmative Repositioning leader and Windhoek mayor Job Amupanda to establish a Revolutionary Union (RU), Horn said time will tell about its impact.

“Dr Amupanda is an intelligent politician and strategic leader. New unions may just be popular. They chose the right time to discuss and consider the possibility of new independent unions. However, there is an old saying: ‘Run away from the lion and be caught by a bear’. Time will tell.”

Unam political science lecturer Rui Tyitende analysed a majority of the current trade unions are an extension of Swapo’s patronage networks.
“Before attending to the interests of the workers, union leaders tend to appease the wishes and aspirations of their political masters first. It is unfortunate that since independence, trade unions have been used as a ladder to access power structures within the ruling party,” he stated.
According to him, it is quite sad that the majority of the people who are members of these unions live in squalor and have to constantly protest for wage and salary increases while their leaders live in absolute luxury.

“Unions have become irrelevant to the needs of the people. There should be a serious transformation from wage issues to tangible things such as ownership in companies where they offer their labour, security of tenure, and human development programs,” he said.
For trade unions to achieve the above, he advised, there should be a complete divorce from the whims and influence of the ruling party as the interests of the workers tend to collide with that of government during a stalemate.

For any emerging trade union to make a significant difference in the lives of their members, he says petty politics and squabbles will need to take a backseat, while allowing pressing issues that are of an economic and social nature to take centre stage.
He indicated the material conditions of the members need to be paramount and supreme at all times.
“Political intercourse with political parties should be discouraged and cooperation should only be pursued with organisations if workers’ interests will be enhanced,” he suggested.

‘Wanting’
Political analyst Ndumba Kamwanyah opined trade unionism in post-independent Namibia cannot be compared to pre-independence activism, which represented the rights and interests of the working people very well.
“What we have are trade unions that are directionless and largely operate in an ideological vacuum. Workers’ unions, in themselves, are ideologically driven against the capitalist economy. But to the contrary, our trade unions are in bed, at the expense of ordinary members, with capitalism,” he alluded.

He maintained the leadership has been bribed through corporate board positions, shares and co-option into political positions.
Equally, he claimed, the results are that those leaders who were once vibrant have become tamed to protect their economic interests.
“Therefore, there is a need for new workers activism that is completely independent of party politics and business corporate structures to represent the rights and interests of the working class. I am not sure AR’s proposed trade union is the solution, but I think the intention is right. We need new orientations, strategies, framing, and new momentum in our trade unionism politics,” Kamwanyah added.

Napwu hits back
Meanwhile, Nampa reports the Namibia Public Workers Union›s general secretary Petrus Nevonga said claims by Amupanda that the union is captured by the ruling party is baseless.

Nevonga said this in an interview with Nampa after the union was accused by AR for abandoning its original purpose of fighting for better working conditions of public workers by choosing to side with politicians and not the workers they represent.
However, when contacted for comment, Nevonga rubbished Amupanda’s claims and questioned whether Amupanda had knowledge about dealing with issues affecting public workers in the country.