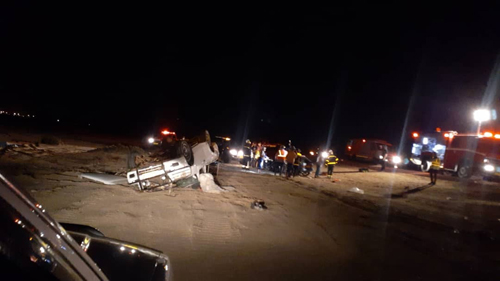 Two teenagers died on Saturday night after the car they were in was involved in an accident while travelling with their fellow soccer teammates from Swakopmund to Henties Bay.

Confirming the tragic accident, crime investigations coordinator for the Erongo region Deputy Commissioner Erastus Iikuyu said a white Ford single-cab bakkie in which the team was travelling was hit by a sky-blue Citi Golf hatchback from the back, causing the pick-up to veer off the road and overturn.

Ten players and their driver sustained serious to slight injuries and are currently being treated at the Swakopmund state hospital.

The driver of the Golf and his passenger sustained injuries.

“The deceased bodies were taken to Swakopmund hospital mortuary from where they will be taken to Walvis Bay Police mortuary for post-mortem examination to determine the cause of death,” said Iikuyu.

The victims have been identified as Fillemon Armas (17) and Given Geingob (15).  Their next of keen have been informed and police investigations are ongoing in the matter.  In an unrelated incident, a case of murder has been opened in Usakos against two suspects for the death of Frans Helao (24).

According to police reports, Helao was hit with a stone on the head during a fight on Friday at Onghulumbashe location, Usakos.

The suspects, ages 27 and 23, have been arrested and are scheduled to make their first appearance in the Usakos Magistrate’s Court today.

According to the police, the investigating officer has been tasked to add and charge the suspects with additional charges regarding the contravention of curfew regulations.