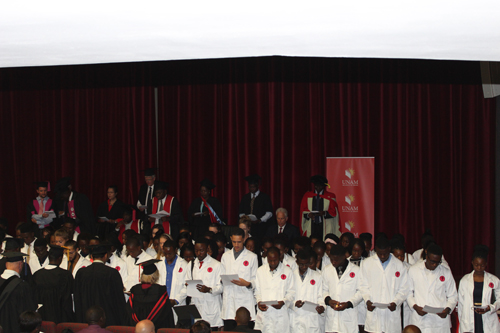 The University of Namibia has produced about 300 medical doctors since the School of Medicine opened its doors in 2010.

The campus, which was named after President Hage Geingob during 2018, has about five schools – namely the School of Medicine, the School of Pharmacy, the Public Health School, the School of Dentistry and the Future School of Allied Health Sciences. These include both international and local students.

He said most of their international students come from the US, Europe, Asia and other parts of Africa. Amaambo reported that the campus management is satisfied with the crop of doctors they produced over the years.

The professor added the school only accepts a total number of 80 students annually. “We don’t have the capacity to accept more medical students.

That is why we only accept a maximum number of 80 students annually,” he said. “We are not an island. We are part of the global community.

So, the number of international students currently stands between eight and ten. All our practising medical doctors are trained at accredited health facilities which are inspected by the dental and medical council.”

However, he announced the campus received a total number of 2 000 applications for the 2021 academic year from prospective students seeking admission to study medicine.

According to him, the issue of admitting based on minimum requirements (35 points for medicine) is the most transparent way. “Out of these 2 000 applicants, we have to try to select 80 students, including repeaters.

All those 80 students must not come from one region during the selection process.

That’s why a strategy was developed for everyone to get a fair share. If you were accepted with 40 points in August but your points in November dropped, you might lose out on the race.

You need to retain 40 points or more,” Amaambo clarified. He was quick to say that the school receives applications for admission from all corners of life and not just from grade 12 leavers.

Furthermore, he stated the campus doesn’t have a waiting list because such a process will disadvantage grade 12 leavers due to the limited intake of 80 maximum. Therefore, Amaambo explained the total number of 80 students to be enrolled is shared in proportion to all who applied, including international students. The professor said the highest number of intakes at the school of medicine over the years remain female students compared to their male counterparts. He indicated that two-thirds of 80 students (53.6%) enrolled annually are females. “Female applicants are always in the majority. It’s not about dishing out qualifications, but they should have quality. We have someone dealing with quality assurance to ensure proceedings of admission committee are meeting the needs of the population,” he assured. The school of medicine is still busy with enrolment where a selection committee will then review all applications to determine the right procedures were followed and ensure transparency in terms of regional and gender representation as well as those from marginalised groups.