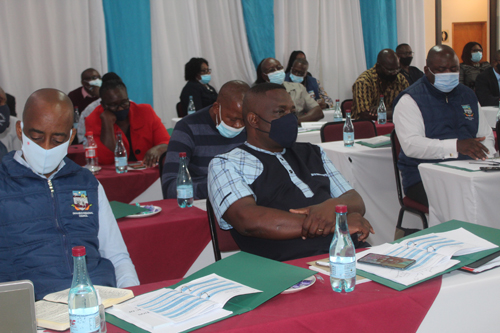 SWAKOPMUND – Regional and local authority councillors should constantly remind themselves that they are servants and not the masters of the electorate.
The elected politicians have also been implored to serve all Namibians regardless of their political affiliation in order to help the country achieve its developmental plans.

This was made clear by urban and rural development minister Erastus Uutoni who addressed various councillors from Oshana and Omaheke regions who are currently attending a four-day induction workshop at Swakopmund.
Speaking at the opening of the induction for the councillors who were elected in November last year, Uutoni said that good governance and a high performance culture characterized by efficiency, effectiveness, accountability, transparency was expected from them in order to execute their duties.

“Your actions of councils must be inclusive and people centred in nature, meaning both council administrators and councillors must periodically consult to achieve what is expected from you,” he said.

He added the communities must also be involved in the planning and implementation of such development initiatives as it is for the communities. “Such unity of purpose and spirit of teamwork must start with the councillors and their administrators working as one team driven by the shared desire to serve the people.

No divisive petty party politics, self-serving interests and infighting among councillors and staff will be tolerated,” said Uutoni. He also said council meetings should not be used as platforms for divisive political agendas but to discuss and find solutions to community problems and needs.

“We have had instances where members of the community complain that they only see their councillors when the President or a minister visits their regions. You should avoid this at all cost by interacting more closely with the community you serve,” Uutoni appealed.
According to Uutoni, the line ministry along with other institutions will hold councils who are failing in executing their mandates accountable as well as for the use of public resources entrusted to them if there are reasonable grounds of mismanagement.
-edeklerk@nepc.com.na