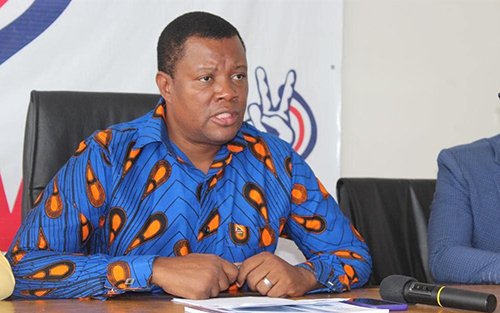 Popular Democratic Movement leader McHenry Venaani has questioned President Hage Geingob’s state of the nation address last week, saying it was riddled with inconsistencies between noble-sounding promises and the reality on the ground.

Speaking on Thursday during his party’s ‘Real State of the Nation Address’, Venaani dissected and unpacked challenges facing ordinary Namibians, while seeking to provide alternative solutions.

The ‘Real SONA’ is a direct response to Geingob’s SONA delivered during a joint sitting of parliament last week Wednesday.

In his SONA, Geingob announced an increase in disability grants from a monthly N$250 to N$1 300.

He also announced the consolidation of the food bank into a conditional basic income grant, in a form of a N$500 cash transfer, which he said will go a long way in providing necessities and boosting micro-economic activities in communities.

“The President dressed up the head and tail of the speech by filling it with what he thinks Namibians want to hear and employing inspirational quotes as a call to action,” said Venaani.

“While we welcome the establishment of the Sovereign Wealth Fund, the increment of the social grants as well as the introduction of a basic income grant, which the PDM has long been calling for, as was a resolution taken at the PDM’s Policy conference last year, indicates that the Geingob administration could have done more over these past eight years.”

He added the youth-targeted projects are belated and the PDM certainly welcomes them, however, citizens must take everything that the head of state delivers with a “grain of salt”.

He claimed for the past eight years, Geingob has merely presented the National Assembly with proposals that appeared too good to be true and that they have frequently proven to be.

“As is a common cause, Namibia’s per capita GDP has led to Namibia being classified as a middle-income country, with the adverse effects caused by this rating, international development assistance and funding have both been cancelled, subsequently becoming more expensive,” Venaani said.

“Namibia is one of the most unequal countries in the world. Furthermore, Moody’s Investors Service has downgraded Namibia’s long-term issuer and senior unsecured ratings to B1 from Ba3.”

He said while he agrees that the country has made significant progress over the past 32 years, he also believes that the gains made in this area are rapidly eroding and that more needs to be done to redistribute wealth, effectively redistribute income, and eradicate poverty.

“As a citizenry, we can no longer deny that the party of the national government, Swapo, bears no resemblance to the liberation movement that assumed office in 1990,” he added.

“The question now begs - what will the electorate do with this knowledge? This question has already partly been answered during the 2019 presidential and National Assembly elections, as well as the 2020 regional council and local authority elections. We are now witnessing the last kicks of a dying horse.”

He said the government of the day is waning in influence and this can be seen by their maintenance of colonial policies.