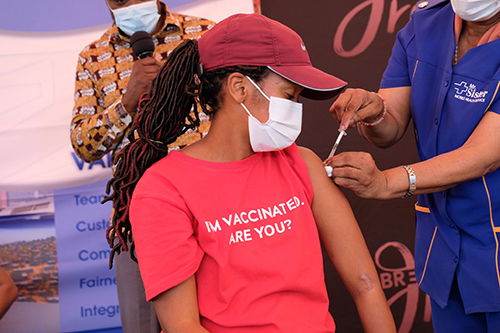 The campaign, facilitated by the Office of the First Lady in collaboration with the City of Windhoek, OmniCare Trust and Vaccines for Hope, hosted vaccination pop up sites from 1 September 2021 to 27 October 2021 and only carried out jabs on Wednesdays.

“We carried out vaccinations at all of these places – and as a team, we realised something. It is not that people do not want to be vaccinated; people have questions, and they need to be answered. This is why we have a team of experts like doctors to attend to these questions by the communities,” said Monica Geingos.

She has been firm on ensuring that vaccines are brought closer to the people because proximity might be one of the other factors stopping people from getting vaccinated because of their geographical location and some living in far remote informal settlements where accessibility to the clinics is out of reach.

“There is no such thing as a stupid question. We also have people who can help us translate these answers into local languages in case English is not easy to comprehend,” she said.

Geingos added vaccination is not a new phenomenon, as many have been vaccinated before and blamed misinformation from various sites including social media for the doubt casting.

“The information is so distorted that we have started doubting things that work for us. One thing for sure that we cannot hide or lie about is vaccination is not the cure. Anyone who is vaccinated can still get Covid-19. The vaccine prevents us from getting severely sick or hospitalised,” she stated.

The campaign also made it a point to touch on the issue of the suspension of vaccines, which is standard practice, especially when a new vaccine product is administered to the wider public for the first time after it goes through rigorous randomised clinical trials.

Recent examples include both AstraZeneca and Johnson & Johnson, the use of which was suspended when a safety signal was discovered and until such a time as the negative signals had been cleared by the relevant bodies and health authorities such as the World Health Organisation (WHO).

She concluded by saying, “the use of these Covid-19 vaccines was later re-initiated after sufficient research and data was obtained from scientific researchers that deemed the vaccines in question safe and effective”.

The main aim of the campaign was primarily to distribute masks to persons living in the targeted communities, providing information on public health guidelines in simplified and interactive ways. Dispelling Covid-19-related myths and misinformation by answering public queries was also a mission of the campaign and encouraging vaccination as a critical clinical intervention by providing credible and accurate information in simplified and interactive ways.

They also marketed the psychosocial support services offered through #LOVEProtects by way of word-to-word as a means to mitigate the consequences of Covid-19 on communities’ collective mental wellbeing.