Home / We are getting there – Jacobs 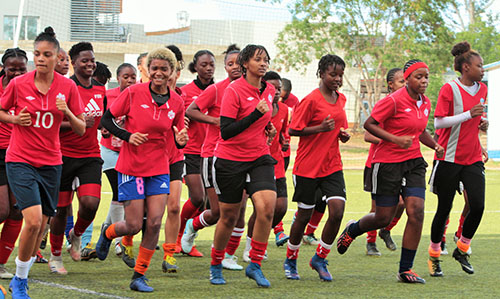 Head coach of the national women’s football team, Woody Jacobs says the team will be physically and mentally fit ahead of its 2022 Africa Women's Cup of Nations qualifiers next month.

Namibia will face Zambia in the final qualification round of the 12th edition of the women’s tournament in a two-legged clash between 14 and 23 February 2022.

The Gladiators will play Zambia away first in Lusaka, before playing the return leg in South Africa.  Jacobs said the players have been training for the past two weeks and are showing improvement in their fitness level, but “we have a long way to go”.

“We usually have two sessions a day; one in the morning and another one in the afternoon. I am positive that the girls will reach the level we need them to be ahead of the match,” he told New Era Sport.

Jacobs attributed the low fitness levels to the inactivity in local football.

“You know there is no football activity in the country, so most of our players’ fitness level isn’t yet there because they have not had any games since the women’s football league stopped. Most of these players were training on their own, which wasn’t sufficient.”

There are also a few injuries in the team.

“We have Thomalina Adams who has been ruled out due to injury, and Lovisa Mulunga is also out. We hope to have them back before the first leg against Zambia in Lusaka.”

The 2020 Africa Women's Cup of Nations was cancelled due to the ongoing Covid-19 pandemic. The 2022 tournament will take place in Morocco between 02 and 23 July this year, and will double as the African qualifiers for the 2023 Women’s World Cup in Australia and New Zealand.

The top four teams will qualify for the World Cup, and two more teams will advance to the inter-confederation playoffs.