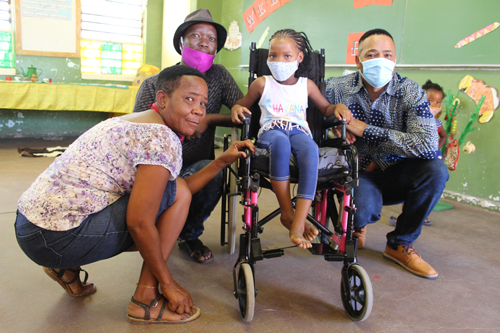 A grade 1 learner at Jakob Soul Primary School in Stampriet was a lucky recipient of a wheelchair donated in kind from the Hardap governor Reverend Salomon April.

The eight-year-old Sara Senoritha Skrywer, who is unable to walk due to a disability in her feet after she sustained an injury to her legs when she was seven months old, finds it difficult to attend school as she has to crawl her way to the classroom.

According to her father, Abraham Skrywer, Sara was just an infant when she fell off the bed she was sleeping on.
“She sustained injuries and was unconscious for six months in the hospital. After she somewhat recovered from her injuries we realised that her feet were suddenly paralysed and she could not walk,” Skrywer narrated.

He however does not know the medical name of the condition that paralysed his daughter’s feet but was advised to take her to a private hospital for Sara to be properly diagnosed and possibly receive treatment.
Skrywer said both he and his wife are unemployed and are struggling to get funds to book their daughter for a magnetic resonance imaging (MRI) scan. The MRI costs N$7 000 according to Skrywer.

“We have been struggling in the past years to secure funds to pay for the scan but this year my wife decided to approach the governor’s office for any assistance,” said Skrywer.

Upon hearing about Sara’s ordeal from her parents, governor April, who himself has a physically challenged daughter, asked his daughter to donate one of her wheelchairs.
“I spoke to my daughter and asked her if she could assist her fellow sister to walk with ease from home to school. She then informed me that she would donate one of her chairs,” said April.

Skrywer added that although Sara is a happy child who gets along well with her peers, she struggles to crawl for a long time and hence they feared taking her to a formal school would pose a challenge.
This year, the family decided to enrol Sara in grade 1 at Jacob Soul Primary School, which caused uncertainty at the school as the school is not equipped with the proper infrastructure that caters for learners with physical disabilities, such as Sara.

According to the school principal, Sara is not the only disabled learner at the school but she is however the only learner who is wheelchair-bound.

Skrywer added that because their daughter relies on them for many things, he and his wife have to be at her disposal during school hours whenever she needs assistance such as when visiting the toilet.

“We have to make sure that we are available all the time to take Sara to the toilet or whenever she needs assistance so that she doesn’t disturb the teacher from her lesson. Luckily our house is only three minutes away from the school so we are always available,” said Sara’s father.
According to the regional education director Gerard Ndafenongo, the ministry is in the process of improving all schools in the region to be equipped with wheelchair-friendly facilities for learners to access classrooms freely.