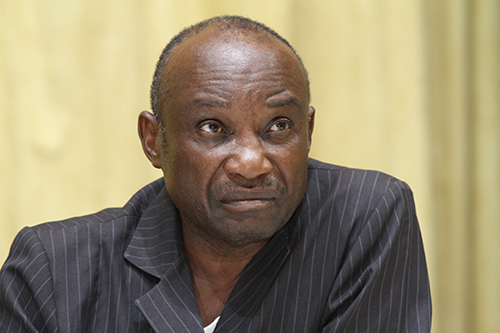 The decision to roll out the red carpet for the ‘return’ of fierce critic-cum-human rights activist  Phil ya Nangoloh has caused rumblings inside Swapo.

Swapo invited the media to cover the “official welcoming back of Cde Phil Ya Nangoloh” at 10h00 at Swapo headquarters today.

Hanse-Himarwa, who was found guilty of corruption in 2019, purported to have taken issue with Shaningwa over welcoming Ya Nangoloh. Hanse-Himarwa did not answer phone calls to her various numbers yesterday.

Swapo Party Youth League (SPYL) secretary Efraim Nekongo said the league does not have any issues with Ya Nangoloh’s presence in the party, but there is no need for him to be glorified unless he will apologise to the Founding President and the Namibian nation.

“It’s not only Phil ya Nangoloh who is applying for membership of Swapo. But due to his historical background, they took a decision to welcome him back with a press conference, and he should be welcomed back like any other member,” added Nekongo.

“We, as the youth league, do not have a problem of him coming back to the party but with the approach of him being welcomed with a press conference. In the past, he uttered many irresponsible statements that can damage a person or an institution. So, if the conference is for that, no problem,” he stated.

He continued: “If the press conference is for him to apologise, especially to the Founding Father or to Namibians, that is something he can do in his capacity. But our view is that we do not have a problem as long as he confines himself to the principles of the party.”

He noted that the welcoming back of Ya Nangoloh has created commotion among the community, which is also welcomed.

Meanwhile, the Namibian Exile Kids Association (NEKA) has condemned the decision by the ruling party to welcome back Ya Nangoloh, saying his purpose is to destroy and weaken the party.

“There is a CV of evidence how Ya Nangoloh and cohorts have systematically wanted to destroy Swapo, and especially vilify, insult and demonise the founding father. It is ironic to hear that this is the man Swapo has approved of joining,” the group said in a statement.

NEKA added: “Dear Swapo, what are the reasons you are inviting Ya Nangoloh to Swapo? Is it to humiliate the Founding President, to embarrass Swapo, or to insult the intelligence of all peace-loving Namibians?”

The association further demanded an apology from Ya Nangoloh to the Namibian nation and Nujoma.

However, Ya Nangoloh said he never left Swapo, nor was he expelled from the ruling party. He will, therefore, remain vocal on issues that affect the community, whether towards government or the opposition, something he has been consistent with.

He told New Era yesterday that he has been a Swapo member since 1974, and his work will continue.

He added that Swapo is under attack, and it has the key to national peace and security in Namibia, at least for the time being.

“If Swapo is destroyed, there won’t be human rights to speak of in the absence of national security. To ensure security and peace in Namibia, you have to defend Swapo from its enemies.

“That’s what made me stand up, speak now, and not sit idle with my arms folded, wearing a human rights jacket while our country is on fire and while Swapo is being destroyed,” he stressed.

Ya Nangoloh said previously there were not as many enemies of Swapo as there are now, and that includes internal enemies, intra-party enemies, anti-Swapo forces within the borders, and those who are outside the borders.

“I am looking forward to collaborating with my comrades in Swapo and peace-loving Namibians who make this country a better place for everyone,” he continued.

He has been a thorn in the governing party’s flesh for a long time and has spared his acerbic tongue lashings for Nujoma, specifically.

In 2007, the NSHR asked the International Criminal Court (ICC) to investigate the role of Nujoma and other officials in alleged abuses during and after the country’s fight for independence.

The then-NSHR wanted Nujoma and three other officials to be investigated for “instigation, planning, supervision, abetting, aiding, defending and/or perpetuating” the disappearances of Namibians.

It said it appealed to the ICC because Nujoma and other officials refused to provide it with information on the cases.

In recent years, Ya Nangoloh’s bête noir was the Olufuko Cultural Festival, which he described as “a harmful traditional practice of child marriage and female degradation.”

He also said the festival is a criminal enterprise, which constitutes indecent exposure and holds nothing positive in terms of culture and tradition.